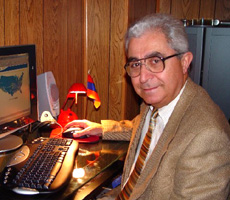 Dr. Haroutune Armenian assumed the presidency of the American University of Armenia (AUA) in January 1997, having previously served as Dean of AUA's College of Health Sciences.

Under his leadership, the University achieved accreditation by the Western Association of Schools and Colleges, focused its research activities on local and regional issues, developed modern physical facilities encompassing four buildings in Yerevan, recruited its first international students, increased collaboration with local universities, and sponsored several initiatives whose impact extends beyond the University. Two examples are the AUA Digital Library Project, which has developed an electronic version of Classical Armenian literature from the fifth to the end of the twentieth century and the Turpanjian Rural Development Project, which offers entrepreneurship training and helps develop small businesses in rural areas of Armenia.

A native of Beirut, Dr. Armenian is a graduate of the American University of Beirut and of Johns Hopkins University. He was Dean of the Faculty of Health Sciences at AUB and as well as Director of the MPH Program and Professor of Epidemiology in the School of Public Health at Johns Hopkins.

He is currently Professor-in-Residence at the UCLA School of Public Health and Visiting Professor at the King Saud University in Riyadh.

Dr. Haroutune K. Armenian announced his retirement at the 20 April 2009 meeting of the AUA's Board of Trustees.

(Based on a press release circulated by AUA in April 2009)