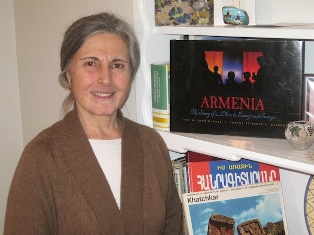 Striving for something counts for as much as achieving something.
(An Armenian proverb)

Santoukht Mikaelian believes this is half the battle, and she tells her Armenian students: Yes, there are a lot of people who know more than you do, but you are the ones with desire: you've actually started studying Armenian.

Santoukht Mikaelian, born in Aleppo, Syria to an Armenian family, has a very different philosophy about education than the kind she herself received in Arabic in an Armenian school?an education she describes as “very strict & traditional.” After her secondary education she studied at the American University in Beirut, where instruction was conducted in English. Her educational experiences convinced her to apply a different approach: positivity. She doesn't like criticism and negativity and concurs with the uplifting and kind Armenian spirit, so apparent in the literary works by her countryman, novelist William Saroyan.

Santoukht Mikaelian ended up teaching Armenian at UC Berkeley after Berkeley found her in 2005. She had always wanted to have some contact with children of Armenian immigrants and feels fortunate that Berkeley is now offering Armenian. Santoukht wasn't new to language education when she was recruited by the university. In 1969, she had followed her then boyfriend (later husband) to the US where he was studying physics. Santoukht in turn started a graduate program in English at the State University New York at Stony Brook. After their marriage in 1970, the young couple moved around for career opportunities: first to Cleveland, Ohio, where they had their first child, then on to Penn State, and their second child. Their third child was born in Stillwater, Oklahoma, and a fourth in Livermore, California, where the Mikaelians settled in 1980.

Santoukht started her career in education in the Tri-Valley area (Livermore, Pleasanton, Dublin)?teaching ESL (English as a Second Language) and ELD (English Language Development) in high schools and adult schools. She loved her work and got “addicted”?as so many of us do?to teaching ESL. The work was interesting, and she still often misses the interpersonal communication and the students she got to know as “real people.” She stayed involved in ESL until part-timer budget cuts made it impossible. At the same time, she was also getting more and more involved in teaching Armenian, volunteering for seven years in a weekly language school in Walnut Creek, teaching both teenagers and adults.

The UC Berkeley offer came to her at a great time as it coincided with her retirement from ELD. She was ready and excited to get started in developing a program at UCB. This is Santoukht Mikaelian's sixth year at Berkeley, and she admits that while her drive and enthusiasm for Armenian language teaching has stayed strong and committed, she has become more realistic. The reality is that Armenian is losing ground, especially in diaspora where the languages of host countries are taking over the language. Santoukht comes from Western Armenia, and she feels that specifically Western Armenian is getting lost in the Armenian diaspora while there's more hope for Eastern Armenian. But even amon