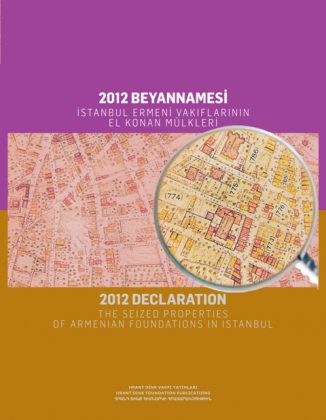 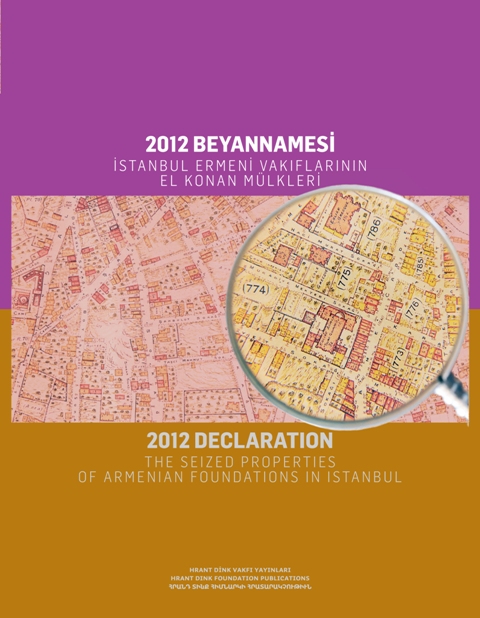 It is not the story of structures made of stone or concrete, of seized buildings that is told in this book, but the story of human beings, made of flesh and blood. The institutions mentioned here were resources created through the concerted efforts of a people who lived on these lands ? young and old, women and men, rich and poor. The properties subject to wrongdoing were material assets that provided a vital life force into places of worship, schools, orphanages, retirement homes, aid agencies, and ultimately, an entire community. They formed the economic bedrock upon which the social life and culture of Armenians in Turkey was built.

May this book record the remaining traces of this life and culture that has been destroyed, providing responses to questions like 'why' and 'how'; so that similar injustices do not take place in the future…

MORE DETAILS ABOUT THE BOOK

The book, as the product of a research carried out by the Hrant Dink Foundation with the support of the European Union and the Open Society Foundation, focuses on the property ownership problems the Armenian foundations in Istanbul have encountered due to state practices. It aims to treat the issue in both its historical and legal aspects, and to form an overview of the subjugation of rights that has been continuing for decades, by producing a comprehensive inventory of the seized immovable assets of Armenian foundations in Istanbul, presenting statistical analyses, and revealing the human-social aspects of the problem. In this way, the target of the study is to make it clear to the society of Turkey that the problem is not only about a 'demand for properties', but an issue of the sustainability of cultural existence; and to contribute towards the establishment of democratic rights in this country.

The book, starting with the “Foreword” of Prof. Dr. H?seyin Hatemi, consists of three sections.

The first section entitled “From Empire to Republic”, puts forth the significance of minority foundations in the daily life of non-Muslims, their history and discussions over their legal personality, and also the various steps the state has taken in parallel to political developments, with references to model legal decisions and implementations. In this section, the information under the title ?Ownership problems of Muslim minority foundations in Western Thrace? clearly reveals that, just like the non-Muslim minorities in Turkey, the Muslim minorities in Greece are perceived as ?aliens? that represent a potential internal security threat to the country they are citizens of.

In the second section entitled “Stories of Unlawful Property Seizure”, there are in-depth examinations on five cases of immovable asset seizure. These are the complete eradication of the Kalfayan institutions from the Halıcıoğlu Neighborhood, during the construction process of the Bosphorus Bridge; the story of the Bomonti Mıhitaryan Primary School, which continues to provide education from the building they had once purchased, and currently occupy as leaseholders; the process of claiming back a building on İstiklal Street as an example of the kind of legal struggle rarely encountered in the Armenian community; the Kasımpaşa Surp Hagop Church Foundation that was declared defunct and fully placed under the management of the Directorate General of Foundations; and the story of the Andonyan Monastery in Ortaköy that has been abandoned to its fate. The story of the seizure of the Tuzla Children?s Camp, the first example that springs to everyone's mind in Turkey when the ownership problem of Armenian foundations is mentioned is also included in this section.

In the third and final section of the book there are brief histories of a total of 53 foundations of the Apostolic, Catholic and Protestant Armenian communities in Istanbul and detailed information and statistics about the seized properties belonging to them that could be identified.

Those interested in the issue may obtain 2012 Declaration: the Seized Properties of Armenian Foundations in Istanbul from the Hrant Dink Foundation free of charge.

Newer PostVardan Marashlyan: Visiting Armenia is not enough. Repatriation is needed
Older PostMustafa Aydin: The Turkish pro-Azerbaijani policy isn't based on brotherhood but rather on economical interests