Azad-Hye, , 24 February 2006: Armenians have been living in the since the nineteen fifties. Around twenty five years ago the community started functioning as an organized entity, with a Community Council, various committees and a school.

2006 marks the 25th anniversary of the Armenian Community School of Abu Dhabi.  Urged by parents and encouraged by the Community Council, two dedicated ladies, Ashkhen Arzoumanian and Sona Badalian started the school in March 1981 to cater for the needs of the Armenian children growing up in .

The response was positive and most of the children of the community started attending ?Haygagan Tebrotz? as the school was fondly referred to. All these children attended the various schools in the city and came together once a week to learn the Armenian language and history under the supervision of volunteer teachers.

During the summer of 1984 both Arzoumanian and Badalian moved to the States with their families and Tamar Der-Ohannessian assumed the role of headmistress / principal.

The school started on a twice-a-week basis, and then changed to just Thursday afternoons, which changed again to Wednesday afternoons. Besides the Armenian language and history, cultural events and competitions are organized, feasts are celebrated and the school year ends with the much-awaited pageant, the ?Amaverchi Hantes.?

This is a worthwhile and important effort,which teaches the children about their roots and culture.  To date, around 270 students have attended the school and sixty teachers have taught there on a voluntary basis.

Under the auspices of Archbishop Gorun Babian, Catholicosal Vicar of and the countries, the 25th Anniversary celebrations will take place on 10th March 2006, at 6:00 p.m. in the main hall of ?The Club?, , UAE.

See circular of the Council of the Armenian Community of Abu Dhabi in PDF format.

A special publication will be ready on that day, with articles and photos on the school, some to be published for the first time.

On this occasion a new website have been launched, where old and new students of the school and their parents in and worldwide would find the following items:

– Photos of the President of the UAE (Sheikh Khalifa Bin Zayed Al Nahyan), the Prelate of and the countries (Archbishop Gorun Babian) and the Headmistress / Principal of the school (Tamar Der-Ohannessian). 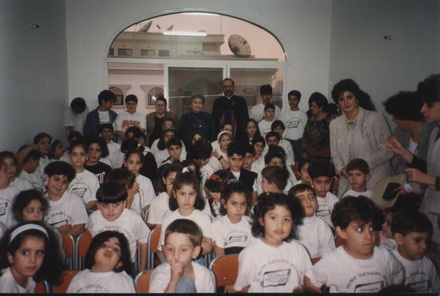 – Contact e-mail for questions and comments. If you have pictures or documents related to the school, you can send them to the given e-mail address.

– Guestbook: Where you can leave your message to the readers. The Principal of the School has posted a welcome message encouraging others to share their views and to send their thoughts and memories.

– Press clips: A collection of what the Armenian press has been writing about the most important events related to the school (mainly end of the year theatrical plays and graduation ceremonies).

– Gallery: The most vibrant section, where some 60 photos are hosted, covering almost all the 25 years of the school (additional photos will be included in the book edition).

– Links: A list of Armenian schools worldwide. This list could be enriched with additional hyperlinks in the future.

– Contact us: E-mail and mobile telephone number of the Principal.