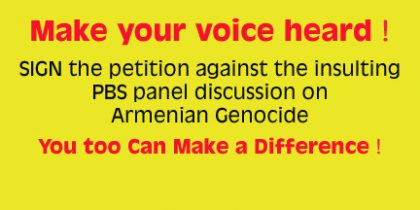 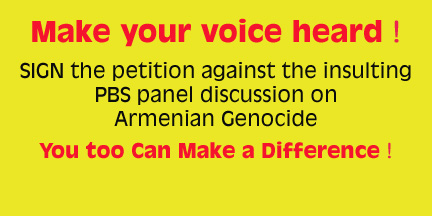 Azad-Hye, , 26 February 2006: If you are against the debating of the Armenian Genocide with Genocide deniers and giving deniers equal air time, you are invited to sign the following:

It is welcome news that PBS is planning to broadcast Andrew Goldberg's “The Armenian Genocide” documentary on April 17, 2006. However, we are immensely hurt by the news that this will be followed by a 25 minute long discussion by a panel that includes two genocide deniers.

Turkish denials of the genocide are part of a state-sponsored policy of propaganda that serves only the interests of . The historical truth of the Armenian genocide has been established beyond reasonable doubt by abundant documentary and eye-witness evidence from thousands of sources. Furthermore, denialist views of genocide are already included in the film; thus the panel discussion would serve to emphasize the Turkish state's official position and undermine the non political nature of your programming.

Broadcasting the panel discussion may result in a substantial loss of support from viewers of PBS.

We the undersigned urge you not to approve the airing of the panel discussion.

To proceed to signing the petition:?

You are advised to use your first and last names when signing. Do not sign more than one time.

Referring to the ongoing campaign to sign the above petition, Appo Jabarian, the Executive Publisher and Managing Editor of USA Armenian Life Magazine, underlined that ?Pro-truth activists kept themselves focused on tapping into the existing huge potential within the Armenian and non-Armenian circles. They remained steadfast in their campaign to gather many more signatures?.

?Many activists realize that this is the beginning of a new phase of a marathon in political struggles against the Turkish denialists?, he added.

By 25 February 2006 the total number of petition signers had surpassed 13,000, not including the direct e-mails, postal letters, direct telephone or fax contacts addressed to channel. Never before had so many Armenians and non-Armenians used internet for a petition of this scale.

As an example of the effectiveness of the campaign, American Armenian Berge Bulbulian received the following statement from his local Public Broadcasting Service (PBS) station in response to his e-mail:

?We will air the Armenian Genocide program April 17th at 10 pm and we have no intention of airing the denial program.? I understand your intention, but threats are not appropriate.? We would never intentionally air a program that demeans or harms our viewers in any way.? Though we strive for balance in our programming, it is not necessary to seek balance where there is none.? The Armenian Genocide is a fact, so there is no purpose in airing a denial program.?

In order to keep the momentum growing please sign the petition at the above provided link.

The ?Petition Against the Armenian Genocide Panel Discussion on PBS? was created by and written by Vako Nicolian ([email protected]). ?It is hosted at www.PetitionOnline.com as a public service.

Turks have counteracted and created their own petition where kinds of accusations against the Armenians could be found.???