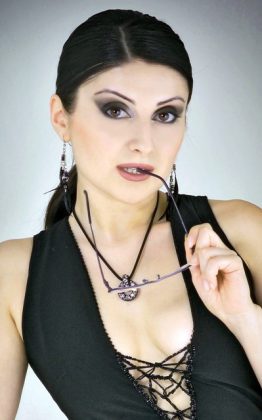 She was the one who shared Emmy the award for ?Best female singer? in the fourth Armenian national music awards on December 15th 2006. Her video clip for the song ?Yerpek ches imana? (You?ll never know) was nominated in the category of ?Best Video Clip? of year 2006 directed by Hrach Keshishian who used recent computer animation techniques in the production. She performs pop rock and contemporary genres. Her famous duet ?Siro Ashkharh? (Love world) with Shushan Bedrossian topped the charts for several weeks. Our guest is singer and composer Hasmig Garabedian. I?m glad that she is my star for this week?s article. And why Cinderella? Don?t ask me she is just like that a contemporary Cinderella.

How does it make you feel to hold the ?Best Female Singer of 2006? title and share it together with Emmy?

Actually I was shocked when I heard Arthur Krikorian calling my name. Though there were only two nominations in this category but I figured that the award would go definitely to Emmy because she has been working hard for the past 10 years and especially last year; she had both an album and a concert of her own. Emmy is very talented and I am glad that her work was finally appreciated but was surprised to be a winner sharing the same award with her; I even didn?t prepare a speech or a thank you list. On this occasion I would like to thank the jury who voted for me and all my fans around the world for believing in me because to me the love of my people is the biggest award.

My journey began at the age of thirteen. I used to compose and write songs but the professional steps were taken at the age of seventeen when I started to work in ?Artsakank? (Echo) studio and participated in the ?Boehm? song contest festival. Later in 1997 I was chosen as a singer and composer to participate in the State Theater of Song by the artistic director Arthur Krikorian and together with other artists we used to have concerts in and Diaspora as well presenting Armenian song with new directions and styles.

After few years I decided to go solo so I started recording my own songs and video clips.

And as a songwriter how do you describe yourself?

It is hard for me to talk about my art. I rather leave this to the public?s judgment but I?m glad that I write my own songs and sing them as well. Most of my compositions are related to my life. They are very honest and sincere because they stem from my soul. I try to be unique in the music I present and always look for variety to avoid similarity that?s why I have tried to sing different genres from techno to soul pop and recently to rock but not the heavy rock; it is more into rock ballads.

As a composer do you usually write the music according to the lyrics or vice versa?

In my case the music comes first and then I fill up the lyrics. Sometimes I write the lyrics too but most of the time I work with different songwriters like Vartan Zadoian Aved Parseghian and others.

Basically I used to sing my own songs but lately I?m honored to work with people whose music is very close to my heart like Gisane Balian; a member of the rock group Empyray. She wrote few songs for me like ?Kez hamar? (For you) and the latest one ?Yerpek ches imana? (You?ll never find out) which was completely in rock genre. The song was premiered two months ago and nominated for ?Best video clip? category in the fourth Armenian national music awards directed by Hrach Keshishian who made the clip one of a kind.

How much ?Image? is important for Hasmig Garabedian?

Image is very important these days. In the past people used to hear the song from a cassette or through a vinyl record then like it even learn it but today they hear through their eyes. A good video clip can turn a simple song into a ?hit?. We are living in a time when audio and video have the same attention that?s why every artist has to spend some time on his/her image to become unique and today there are special people in Yerevan who can help in this regard but in my case I?m lucky to have my sister Armine by my side. She is a painter and what we call artistic designer. She is responsible for my make up and even for my concerts and video clip wardrobe beginning from choosing the design drawing sketches till the last steps of it. 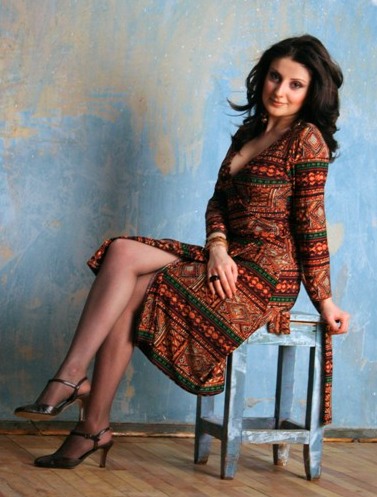 In today?s Armenian music industry every artist has to be unique to be distinguished amongst the others. What makes Hasmig Garabedian different in your opinion?

As a singer I?m flattered when I hear prominent and professional musicians? opinion about my music. It makes me happy when they say they can recognize the voice of Hasmig Garabedian immediately after hearing only few notes and never confuse it with any other voice. Besides there is something ethnic in it which is very rare to find in today?s voices.

And as a composer I think the songs I write contain influences of both English rock and American country music. They have nothing to do with Armenian music. The melodies come out of me just like that and this makes them different from others.

I know that one of your idols in today?s Armenian contemporary music is Shushan Bedrossian how did this special friendship begin between both of you?

I want to mention first that to me Shushan was always the ideal representative of Armenian music from the previous generation and I respected her very much as a singer and as human being but we didn?t know each other yet. I remember the moment when she asked me to write a song within my genre; a duet for both of us. To be honest I was shocked because both our musical styles are different from each other and was surprised when she told me how much she likes my music especially the song ?Horinvadz ser? (Composed love). Therefore I wrote the song ?Siro Ashkharh? (Love world) – lyrics by Aved Parseghian – and it was the beginning of our friendship which lasts till today.

Beside Shushan Bedrossian you had duets with Andre Hayko and others. Is there anybody you have dreamed to sing a duet with?

Yes there are few names to be mentioned. I would like to sing a duet with Linda from Russian Estrada. I like the music she sings and she works perfectly in her career. There is a big name with whom I dream to share my voice; Eros Ramazotti. I adore his voice and I think the difference of both our voice types may lead to a nice duet.

And anyone from the Armenian stars?

I had duets with many Armenian stars as you mentioned. I have a new duet with Arsen Krikorian called ?Sern e khosum? (Love speaks out) music by Arsen himself and lyrics by Aved Parseghian and another duet in English with Dikran Bedrossian (composed by me and lyrics by Vartan Zadoian).

When you walk in the streets do you feel annoyed when people ask you for autograph or wish to take a photo with you? In other words how far does the artist?s life belongs to him/her?

It is nice to see when people recognize you because this proves how much they love and appreciate your music but sometimes you get tired because you need to live a little bit for yourself and have your own privacy especially in our little country where everybody knows everyone. Once you are on TV you should prepare yourself for more attention by the public on the following day. But I never get angry of such behaviors even sometimes when I?m in hurry a little smile or a nice greeting to a fan is important because it means a lot to him/her. I have to admit that I love my city and its inhabitants.

Did you succeed to balance your life as an artist and as a natural human being?

I believe this is not only my problem. My friends who are artists as well suffer from this equilibrium. It is not yet acceptable in our community the idea of being a housewife and a ?singer? performing on the stage in the same time because people still think that a woman belongs to the kitchen her husband and family. She cannot balance between her responsibilities as a wife and her duties as an artist. Men always feel jealous when their wives manage to do all these things together. It gets worse when they begin to treat their wives as one of their belongings and as a result they completely spoil their careers.

I came to a conclusion that we have to get rid of these old beliefs and to be more open-minded. Names like Alla Levonian Zaruhi Babaian Vartuhi Vartanian Kohar Kevorkian and others are brilliant examples that nothing is impossible.

And do we see Hasmig Garabedian with someone in the world of love?

Love makes life more colorful and gives it a meaning. I guess everybody will reach this point if he or she acts truly and honestly. Unfortunately I still don?t have anyone to share my love and life with but I?m very optimistic that one day I?ll be a wife with kids and still sing on stages.

Let us go back to your music world and tell us about your future plans.

I?m working now on my fourth album; I?m busy writing new songs and already recorded some of them. I?m not sure when it will be ready but hopefully through this year (2007). After that I guess it is time for me to think about having my own concert in with live music performances and my own show too.

On behalf of Azad-Hye team we congratulate you and Emmy for winning the ?Best Female Singer of 2006? award and wish both of you all the best. May all your plans be fulfilled.?