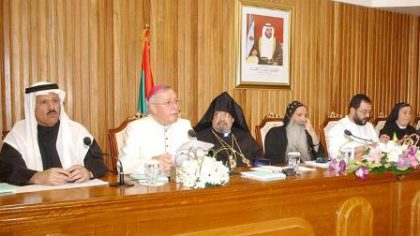 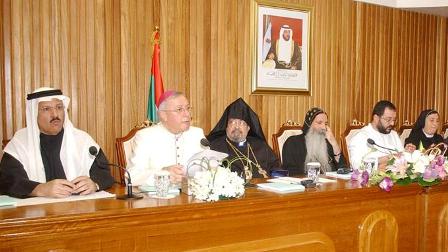 The Information office of Sheikh Sultan bin Zayed Al Nahyan, Deputy Prime Minister of the United Arab Emirates, organized a symposium in Abu Dhabi on 23rd January 2006 under the title “President Khalifa and the culture of tolerance”.

As a speaker in the symposium, His Eminence Archbishop Goriun Babian, Catholicossal Representative for the Diocese of Kuwait and the Arab Gulf Countries referred to the existing freedom of worship and the culture of tolerance in the United Arab Emirates, a fact that provides many opportunities to the members of the Armenian Church in terms of preserving their national and religious identity and remaining faithful to their roots.

Archbishop Babian highlighted the heritage of tolerance and interaction with the other religions as part of the legacy of the late President Sheikh Zayed bin Sultan Al Nahyan (the father of today?s President Sheikh Khalifa), who had welcomed in Abu Dhabi the visit of two leaders of the Armenian Church: late Catholicos Karekin I (1994) and current Catholicos Aram I (1998). Archbishop Babian expressed gratitude for the deep understanding shown regarding the demand of the Armenians in Abu Dhabi and the generosity of the authorities by granting the right to build the Armenian Church and providing a piece of land and a sum of money for this purpose. He praised President Sheikh Khalifa Bin Zayed Al Nahyan for his role in spreading the culture of peace and religious dialogue amongst the people of the region.

He pointed out that adopting a serious dialogue requires an atmosphere of openness and mutual respect, without nurturing any feeling of superiority. He also noted that the focus of such dialogue must be on spiritual values that bring closer the believers of differnt denominations. This is an important mission, especially in the multicultural societies of the Gulf countries.

Archbishop Babian highlighted the role of religion in the Middle East and emphasized the necessity of coexistence in the land that witnessed the beginning of many human civilizations. The Middle East is a unique place where Judaism, Christianity and Islam can work together and change the current tide of war and instability, he added.

He stressed that Muslim-Christian dialogue in particular should be aimed at correcting long-standing biased and erroneous interpretations and impressions about each side. The dialogue should bring forward a renewed understanding of the message of God, he concluded.