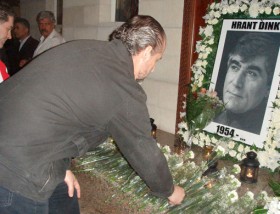 Over a hundred Armenians gathered at their community church in Sharjah on Tuesday evening to pay their respects to the slain Turkish-Armenian journalist Hrant Dink who died of gun shot wounds last week.

Silvia Davidian who attended the service said Dink died for representing the Armenian cause. “This has affected me a lot because he was murdered for speaking out the truth.”

Approximately 2 000 Armenians living in the UAE expressed their shock over Dink's murder.

A large television was set up within the church courtyard that aired Dink's funeral procession in which coincided with an emotional speech by one of the community members. A short biography on Dink was also read out. White roses were laid and over a dozen candles were lit at the doorsteps of the church where a framed black and white photograph of smiling Dink was placed.

“He was not a criminal or a politician and he did no harm. He only spoke out his mind because we could not live with our cultural rights ” said Mher Bedirian 38 who regarded the incident as a humanitarian tragedy.

“We went to live all around the world but he had the courage to live in and for three years was in conflict with government authorities for speaking out his mind ” he added.

“I admire him for what he did and for what he was doing for us as Armenians ” said 22-year-old Raffi Jobanian.

“This is an 85-year-old wound. We want to live in peace and it's as simple as that ” said Hratch Davidian.

A SPECIAL SKETCH PREPARED BY VAHE ASHODIAN REFERRING TO THE TURKISH PENAL CODE (TCK) ARTICLE 301 … WHICH IS STRONGLY LINKED TO HRANT DINK'S MISHAP. 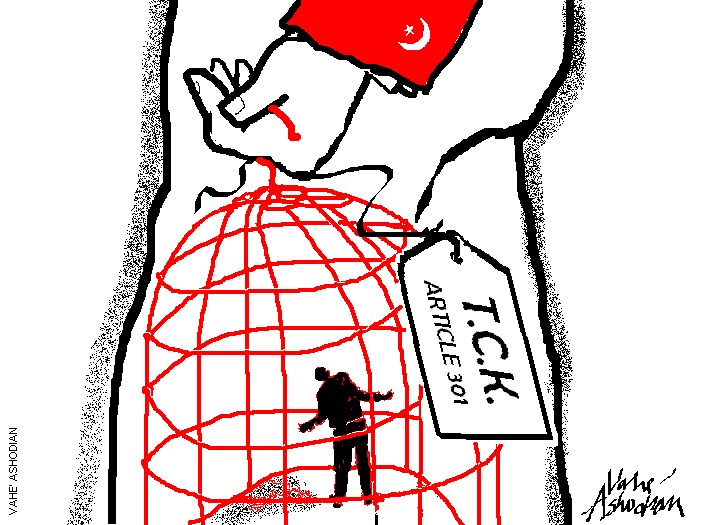