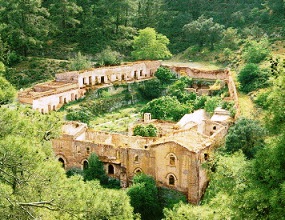 In 2001 a British journalist named Ben West visited Sourp Magar Monastery in the northern part of (now occupied) and wrote in the travel section of the “Guardian”: “Sadly, Sourp Magar has been comprehensively vandalised, but it is still a beautiful spot with an unbelievable silence and the heady scent of pine trees”.

In May 2005, Armenian news agencies reported that the Monastery was turned into a cafe with the intention also to build a hotel or a recreation center on the site. After actions by the Cypriot Government, international bodies expressed concern on this matter, notably the , which issued a severe response. The hotel “licence” was temporarily halted.

In April 2006 Easter time, Sebouh Armenagian, a Cypriot Armenian based in Sharjah (UAE), visited Sourp Magar Monastery with the spiritual leaders of the community. Here are his notes:

It was Armenian Easter. We met Hayr Paren in the in Limassol (Saint Kevork). His face was familiar. He has stayed in (UAE )for a couple of months in the past. After the Holy Mass we had a chat with him and remembered the old days in and Sharjah.

We were informed that he and Archbishop Varoujan Hergelian (Catholicosal Vicar) are planning to go to visit Sourp Magar Monastery in the occupied areas after the Easter. He invited us to join the group.

The next day we headed to the Prelacy in . The weather was better than the day before and there was less risk for rains.

We noticed that both Archbishop Varoujan and Rev. Father Paren were wearing civil clothes. They told that though it was not forbidden to go to the occupied part with formal wearing, but it is better to keep low profile and not to provoke any reaction there.

inger (jamgotch) Vache Megdessian. Although he has been there before, he did not remember the exact route that we needed to follow. Archbishop Varoujan called Dr. Antranik Ashdjian and asked him for directions.

At the borders (the so called Green Line) we had a bad feeling when we read a big banner stating: “I am happy that I am a Turk”. You could see churches transformed to mosques, houses of Greek Cypriots inhabited by Turks, etc.

We followed Dr. Antranik Ashdjian's instructions and took the . At some point you will notice the sign leading to Kyrenia. If you watch carefully you will encounter a small signboard for Sourp Magar.

After the signboard we took a narrow road, where only one vehicle could pass. We were thinking what will happen if another car appears from the opposite direction. Vache managed to reach to a point where “Armenian Monastery” was written.

The Monastery was closed. We went to a nearby governmental office, where we communicated with the Turks using English and some Turkish. We asked for the key. A wrong key was given first and then we received the correct one.

We had to walk for some 2 kilometers. We reached there and saw the Monastery transformed into a restaurant.

Archbishop Varoujan remembered that he had held a baptism ceremony in the same place in 1973, one year before the invasion. He gave us some explanations.

We noticed that the most part of the church has been destroyed. In the baptism basin we could see only the letters HA (the first letters of havadk = faith). The complete saying is faith, hope and baptism.

Various parts of the Monastery were extensively dug up by the Turks in the hope of finding gold.

On the way back we had a stop at the , located in the occupied Armenian quarter of . There is also the old Prelacy buildings and the . Everything is destroyed.

At 5 pm we were back in the Prelacy, thinking what unforgettable day we had just experienced.

The monastery of Sourp Magar is situated at a height of 510 meters above sea level, on the northern slopes of the Kyrenia mountain range.

Its location being at the edge of the cliff and the beginning of a deep ravine is very picturesque.

The monastery came into the hands of Armenians at a later stage (15th century). The exact date and the circumstances of this transfer are unclear.

Close relations exist between the Coptic and Armenian churches since the Council of Chalcedon in 451 AD.

The monastery was also used as a summer resort by the Armenian Church and became a favorite pilgrimage spot for Armenians on their way to and from the .

The upheavals in the at the beginning of the 20th century resulted in the arrival of thousands of Armenian refugees on the island. The monastery opened its doors to orphans and to those in need. It also developed farming to help feed the hungry.

Right until the Turkish invasion of 1974, the monastery was a favorite place for Armenian families and schools to visit, as its grounds were particularly pleasant, especially in the hot summer months. The feast day is 1st May.

All manuscripts and other relics kept in the Monastery were plundered and sold and only the intervention of the , the Armenian Church and international organizations prevented further destruction of the monastery.

From 1974 to 2005, the monastery has been inaccessible to Armenians or Greek Cypriots. Lately it was allowed to conduct daytime visits to the occupied part of .

See the page on the Armenian churches in (prepared by Dr. Antranik Ashdjian). The following churches are in the occupied areas:

? : Located in the occupied Armenian quarter of

? Sourp Magar Monastery (Magaravank): Located in the Kyrenia Mountain Range, with more than 9000 donums of orchards and fields

2- “Guardian” article on travel to Sourp Magar Monastery and other historical areas in the occupied part of .