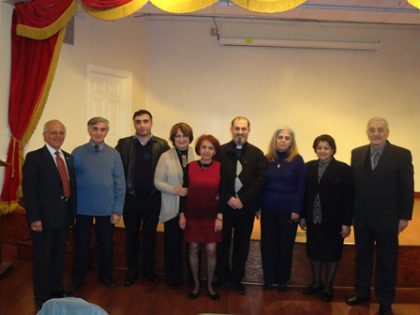 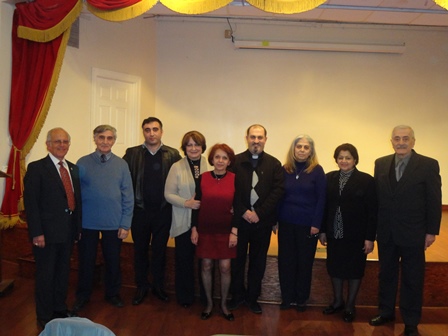 Sos Sarkisian was one of the most beloved and appreciated stars of stage and screen and undoubtedly the most respected individual within and outside of Armenia. It was, therefore, most appropriate for the New York Chapter of Hamazkayin to organize a program  to honor S. Sarkisian's memory and to pay tribute to the extraordinary Armenian that he was. And so on Friday, January 31st, fellow Armenians gathered at the Armenian Center in Woodside to attend the program, dedicated to this prominent artist, great patriot and civic leader.

Asdghig Sevag, the vice-chairperson of the chapter, made opening remarks and invited Dr. Ara Caprielian to introduce the keynote speaker, actress and the Executive producer of Voice Of Armenians TV (www.voiceofarmenians.com) Karine Kocharian.

The presentation began by the screening of an interesting and informative video prepared by Ms. Kocharian. The excellent montage of various interviews with Sos Sarkisian revealed his views, beliefs, raison d'?tre and philosophical perceptions of life. It also highlighted his notable artistic career and – most importantly – gave the audience an opportunity to see and hear the beloved actor impart his stand on significant national issues.

The video was followed by Karine Kocharian's oral presentation, consisting of four parts: Sos as an actor; as a person; as a patriot, and as a political activist.  Having shared the stage with Sos Sarkisian at the Sundukian theater, Ms. Kocharian had a panoply of personal memories and first-hand experiences to share with the audience. Sarkisian's multifaceted persona as an artist, concerned Armenian, a loyal and honest friend, a dedicated member of the ARF emerged through the oral and video presentations. It was interesting to hear Sos Sarkisian's commentary on shortcomings in contemporary society in Armenia, his dismay at the less than stellar quality of television programs currently offered to the public, as well as his sharp criticism of the sub-standard colloquial language. Most of all, it was instructional and gratifying to see how S. Sarkiain endeavored to instill in the young generation patriotism and loving respect for our language. The presentation elicited a strong round of applause.

After the closing remarks, A. Sevag thanked Rev. Fr. Mesrob Lakissian, pastor of the St. Illuminator's Armenian Apostolic Cathedral, for his unwavering support of Hamazkayin's activities. She also acknowledged the presence of Dr. Dikran Kazanjian, chairman of the Regional Executive of Hamazkayin, who was present, although he resides in Washington, D.C.

We would like to congratulate the New York chapter of Hamazkayin for having organized this event, for the warm atmosphere in which all present lingered long after the program ended, enjoying one another's company and the scrumptious desserts.