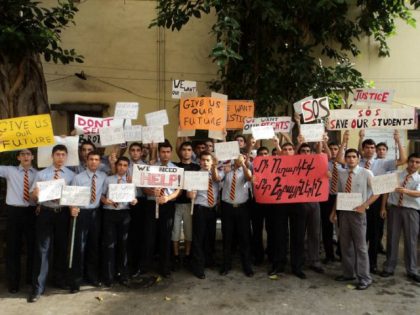 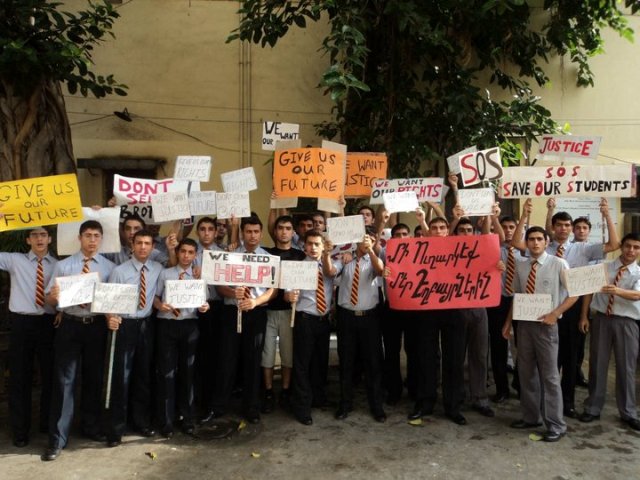 The oldest educational institution in the Diaspora needs an education specialist not a religious supervisor.

On 02 August 2010 students in the Armenian College and Philanthropic Academy?s (ACPA), started a 3-day hunger strike protesting uncertainty about their future and citing acts of humiliation displayed against them by Father Khoren Hovhannisian, the pastor of the Armenians in India and the manager of ACPA since 2008.

During his first months as manager, Father Khoren has literally flooded the Armenian media with a series of press releases aimed at projecting a very positive image of ACPA. Inside the school, however, the situation was not comfortable, especially with the young graduates who continued their studies in other educational institutions in Kolkata, but were allowed to use the school dormitory.

On 01 July 2010 following a trivial incident involving student Andranik Gevorgyan who made a mistake in reciting a poem, father Khoren ordered him to pack his bags immediately and return to Armenia. Senior students protesting Father Khoren?s decision, were surprised to see Indian police officers entering the school.

According to ACPA?s press release “one of the students was expelled on the grounds of serious breach of discipline and disrespectful insubordination of the school authority? At the time of the departure of the said student, a few fellow students put up a stiff resistance, threatening violent consequences if their friend went away. Sensing that there could be a breach of peace in school which will be harmful to one and all, the police was requested to maintain peace on campus??.

July ended with the news of another expulsion form ACPA. This time the victim was 18 years old Karen Mkrtchyan. Karen was only 8 years old when he was first sent to India. He was asked to leave the country just weeks before his final exams.

Immediately afterwards news of the hunger strike circulated the Indian press with photos of the protesting students. Etchmiadzin sent to Kolkata Father Ktrij Devejian, the Foreign Press Secretary, who was familiar to ACPA and has resolved an old dispute related to the ex-manager Sonia John in 2005.

Father Ktrij first promised to annul Karen?s expulsion. The students stopped their strike, but Karen was nevertheless ordered to return back to Armenia. In an interview with Shant TV station, Father Ktrij accused Karen Mkrtchyan of having poor results. 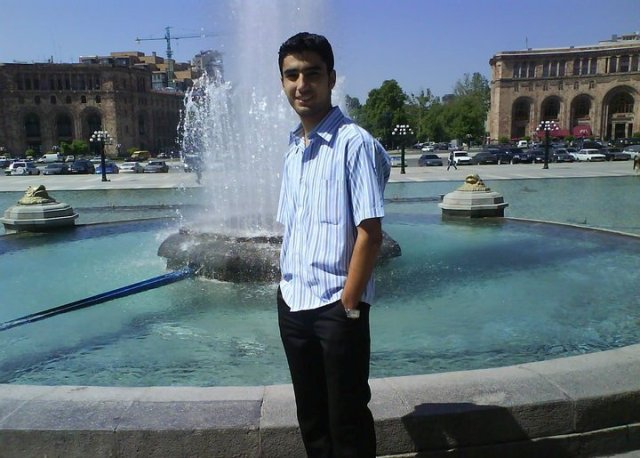 Azad-Hye had the following interview with Karen Mkrtchyan:

Did you have poor results in your studies in Kolkata?

I graduated from ACPA in 2009, with 79.90% grade, and joined ?La Maretinere for Boys?, Kolkata. I was studying there and I am still a student of the institution. I was not expelled from La Martinere, I was just expelled from ACPA which acted as my home there and my sponsorship was cancelled by the Armenian Holy Church of Nazareth. The principal of La Martinere has told me that I can go back and continue any time I like. I was a class 12 student, and had the incidents not happened, I was due to complete my class 12 this year. I object Father Ktrij's claims regarding my marks. They were not at all bad. Had it not been good, my school Principal and the teachers would not make me and Andranik Gevorgyan a school prefect, an honour bestowed on only 20 out of 3 thousand, and for which studies and discipline play a vital role.?

Did you have any reaction when Father Khoren Hovhannisian announced that he would dismiss all students who are not able to achieve 75%?

I do not deny that we the students were not happy at all with this announcement because getting 75% under Calcutta University is close to impossible. There are colleges who do not give grades more than 60-65%, and getting the 75% is out of question.

Why you and the other graduates did not return to Armenia after finishing studies in ACPA?

Back in 2001 when we were being taken to India, we were promised that after class 10 we would be sent abroad. Then this abroad became any city in India. Any city in India became only Kolkata and now only Kolkata has become the college of the management's choice. Had we been told that we would be sent home after class 10, then none of us would have gone to India, as getting a class 10 degree would be easier in Armenia than in India, where one is far away from the family. I was surprised to see how well Father Ktrij could allow himself to lie so much. He claimed that in 2008 they faced something unplanned when the then 4 graduates said that they wanted to continue their education in India.

How did the recent incidents develop?

It all started on the day Monte Melkonian?s brother, Markar Melkonian visited our school to talk about his recently published book, “My brother's road” (http://www.armeniancollege.in/monte.html). Andranik Gevorgyan and another student had to recite a poetry regarding Monte, and on the stage he got nervous and forgot a few lines. This made Father Khoren furious and he started insulting Andranik. Next day we found out that Andranik was punished from TV, Games, swimming for an entire month. So he approached Father Khoren, but Father Khoren told him he did not wish to see his face. He went again the next day; Father didn't allow him to enter the office. The third time Father Khoren ignored him and his friend and walked off while they spoke to him. Andranik said he did not agree on being punished as he did nothing intentionally and he did not forget the lines on purpose. The following Sunday, Linet, a 20 year old girl who had just been back from her family had not remembered to get her script to church which she was supposed to read. Father Khoren, in the middle of the Devine Liturgy, stood up, insulted the 20 year old girl in front of everyone in the Church. After this incident we the senior students decided that we had to meet Father Khoren to address our various problems such as our need to be respected. We wanted also to discuss the new 75% threshold for sponsorship. We addressed our minor and major problems, and since Andranik's punishment was the 'hot topic', Father came to the conclusion that Andranik had gathered an army against him. Andranik told him that he did not deserve to be punished. Father told Andranik that he would be sent home if he went down to play. Father constantly challenged the 21 year old saying ?What can you do? You can do nothing.? Andranik lost patience and said that he would play, and father said he would like to see him do that. So Ando, went to play the next day. We came back from La Martinere and saw police at the gate. After lunch the warden told Ando to pack his bag and Leave in 20 minutes. We were locked in the dorm by the police who were present in the school before we came and not following our alleged threat to damage the school as Father Ktrij is claiming in his interview with Shant TV.?

At what level was the confidence between Father Khoren and the students?

I will give you one example. Father Khoren promised not to sent Ando to Armenia, but to Chennai instead. We found Ando a sponsor and all papers were set, but we were lied. Ando was not sent to Chennai and furthermore I was also expelled. Seeing me being expelled as well and being lied, the students decided that they had no security for the future as anyone could be next to be sent back home. They decided to have a strike. As Ando and myself felt cheated too, we joined them with pleasure. Our parents spoke to the Church in Armenia, and were promised that we would be given justice. However, they were lied too. When we heard that Father Ktrij was coming, we thought that his visit would be good for us and he would care to hear our story and make things better. He heard me and Ando, recorded our talks (Father Khoren was present as well) and still stuck on the decision to send us home. And nothing changed……

And what about now when you are back in Armenia. Can you arrange to return back to your Indian school to continue the remaining part of your studies?

Well, the obstacle is mainly financial. Besides, I have to serve in the army. We were told that the church would not hamper our chances to return to India with our own money if we wanted to, but they lied again and they immediately informed the army that we were not students any more.

What do you want to tell the readers?

Learn from our story. Life is full of obstacles and people who can take advantage of your life for their personal gains. Never lose hope. Just believe in God and move on. Don't lose faith in religion just because our priests are the way they are. I shall pray that God may forgive Father Khoren and Father Ktrij. My life is not over.

End of the Interview

The ex-students of ACPA are planning to have a reunion in Yerevan in the third week of September 2010 and will attend Holy Mass in Etchmiadzin and will be welcomed by the Catholicos.

We believe that it would be good opportunity for them to raise issues related to ACPA. The college needs managers that understand about education. The ex-students, the majority of whom have reached high ranks in their careers, have a moral obligation to stand by the current students and strive for creating a better educational atmosphere in ACPA. We believe that after doing that, tourism and cultural activities in place for their reunion program would be more enjoyable.