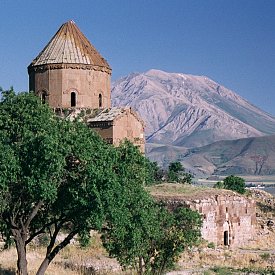 In a recent article, Istanbul based Armenian daily “Marmara” refered to the speech of the Turkish Culture Minister Atilla Goc in the Turkish Parliament, in which he had announced that the re-opening of the restored Armenian historical church of Aghtamar (in Aghtamar island, lake Van, present-day Eastern Turkey) will take place on the same day which the Armenians accept as commemoration day of the Armenian Genocide (24 April)

On 20 December 2006 Noyan Tapan news agency reported on the reaction of the obviously upset Armenian Patriarch of Istanbul:

, DECEMBER 20, NOYAN TAPAN. Archbishop Mesrop Mutafian, the Armenian Patriarch of Turkey, responded the statement made by Turkish Minister of Culture Atilla Goc on the previous day, according to which “the reconstructed Aghtamar church must be opened on April 24.” The Patriarch mentioned that it is nothing else but to speculate people's pains for a political purpose, even, to mock. In his words, opening of the recostructed church on that day will completely liquidate the positive influence of the opening.

“The weak relations between the two countries will be done more damage than they were done by the decision made by the French Parliament, will be criticized on the international scene with the accusation of impudence. Such an approach towards the Armenians' pains is as wrong, as the ones using the genocide as a source for profit are wrong. I can say at the moment that no Armenian, including me, will take part in the opening of the church,” Patriarch Mutafian said, adding that such an impudent attitude towards another's suffering is not admissible either from religious viewpoint or from the viewpoint of conscience. Patriarch Mutafian also expressed perplexity on the occasion of turning “Ani” place name into “An.”

“The issue that Armenians are native inhabitants of is a reality which may not be renounced. Though names of some cities, regions, monuments having a historic value can be changed in the way they change names of cities and villages, but it is a blame against the heritage of the world history, insult against the historic heritage. Such a change of names means self-deception, and it puts our country and our scientists into a funny situation. The Ani ruins are a historic heritage left for our country, and I want to believe that , with outline of state ripeness, would not want to be engaged in such a wrong policy of changing the names,” the Armenian Patriarch of Turkey said.