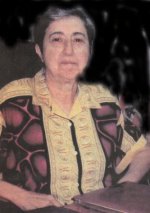 One of the veteran members of our community Aline Parseghian passed away on 15th August 2006. She was living in the since 1976.

Last service for her soul was performed in the Saint Krikor Illuminator Armenian Church of Sharjah, on 20th August 2006. The burial ceremony took place in .

We extend our sympathies to her beloved ones and relatives.

Aline Parseghian was the first Lebanese woman to fly a plane in the sixties of the last century. Commenting on that episode, she made the following remarks to daily ?Al Ittihad? (9 June 2004):

?In the sixties there was a club in for learning how to fly. My family had some friends who were professional and others who were amateur pilots. I liked the idea of observing the earth from a height and looked forward to fly freely in the sky.

I was accepted into the flying school with big difficulty. I was the only girl there. I took some fifty lessons from a British instructor. Then the crucial moment came.

I chose to fly in the early morning, when there was almost no one in the club. I saw beautiful from the sea to the mountains under the wings of my plane.

I was feeling as a child playing with her doll for the first time in her life. I shouted with all my energy and nobody could hear me.

Although there were some restrictions on the height and the time allowed to fly, nevertheless, I enjoyed this experience?.

Beautiful was bombarded this summer and the signs of destruction appears in many places, but the spirit of Aline will be flying high over the city, as she used to do with her plane when she was young.