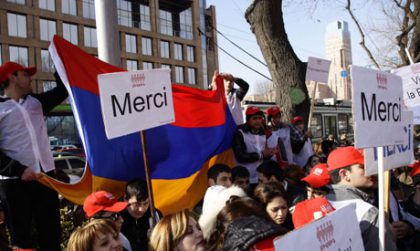 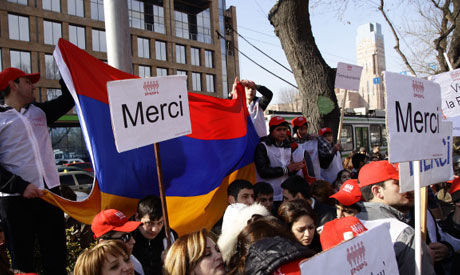 Analysts believe that Turkey can no longer escape its duty of contrition for the genocide, especially with the French Senate's legislation for criminalising the denial of the 1915 massacre

Turkey's attempts to intimidate France and other countries over the question of the Armenian genocide are bound to backfire, analysts said as the 100th anniversary of the bloodshed approaches.

“This negative and reactive strategy has failed, and no one is ready to admit it,” said Cengiz Aktar of Istanbul's Bahcesehir University.

“I hope that the authorities will think about it and come up with a different tack by the time of the 100th anniversary of the Armenian genocide that is coming up” in 2015, said Aktar, an international relations professor, using the term Ankara condemns.

Hugh Pope of the International Crisis Group agreed, saying: “There are many people in Turkey that are worried about how Turkey is going to handle the situation in 2015.”

He said Ankara should “get on a path of reconciliation with the Armenians so that they can be on the side of the people who are going to be remembering the lost communities of Armenians” in the anniversary year.

The French Senate on Monday approved legislation under which anyone in France who denies that the 1915 massacre of Armenians by Ottoman Turk forces amounted to genocide could face imprisonment.

On Tuesday, Paris brushed off angry threats of retaliation by Turkey and said the bill would become law in two weeks.

Ankara has already halted political amd military cooperation and is threatening to cut off economic and cultural ties. Bilateral trade totalled some 11.7 billion euros ($15.4 billion) in 2010.

The French chamber of commerce in Turkey, which has some 400 members, on Thursday expressed “great disappointment” over the bill, and called on France's constitutional council to nix it.

“Turkey is making more and more threats against France,” wrote editorialist Semih Idiz in the Milliyet daily. “But in a few weeks the issue will rear its head again in the US Congress. There are other countries waiting in the wings. Will Turkey recall its ambassador each time?” he asked. “It's an absurd situation.”

Armenia and its diaspora in countries around the world have long campaigned for international recognition of the killings as genocide, despite strong denials from Turkey.

Armenians says that planned massacres and deportations left more than 1.5 million people dead, but Turkey puts the number at up to 500,000, describing the bloodshed as civil strife stemming from the conflict with Russia in World War I.

Around 20 countries have officially recognised the killings as genocide.

Turkey can no longer escape its duty of contrition for the genocide, said Soli Ozel of Istanbul's Kadir Has University

“First and foremost it must express chagrin, and the Turkish state has never done that,” the international relations professor wrote in the daily HaberTurk.

Photo: Activists of an Armenian youth group gather at the French Embassy in Yerevan to express their gratitude to France's parliament for passing a bill that outlaws denial of Armenian genocide, in Yerevan, Armenia, Tuesday, Jan. 24, 2012 (Photo: AP).