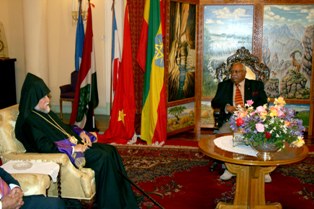 His Holiness Aram I started on 10 July 2007 an official visit to Ethiopia upon the invitation of the spiritual leader of the Ethiopian Church, Patriarch Paulos. In addition to visiting the Ethiopian Church, the visit aimed at reconciling the differences between the Ethiopian and the Coptic Churches, a task to which the Armenian Catholicos has been dedicated during the last few years.

Aram I was welcomed by Patriarch Paulos and about 20 bishops at the Addis Ababa airport. The chairman of the small Armenian community of Ethiopia, Vartkes Nalbandian, welcomed the Pontiff in the airport?s honor hall.

On the following day (11 July 2007) Aram I met with the President of Ethiopia Girma Wolde-Giorgis in the Presidential Palace in Addis Ababa. The Armenian Pontiff and the Ethiopian President discussed the relations between the Armenian and Ethiopian Churches, the situation in Lebanon, the role of religion in the world, Christian-Muslim dialogue and the role of the Armenian Catholicos Aram I in reconciling the Coptic and Ethiopian Churches. President Wolde-Giorgis highly praised the reconciliatory efforts of His Holiness, especially in these days, when more than before churches are called upon to cooperate on issues affecting human society.

On the same day a Joint Declaration was signed by Patriarch Paulos and Catholicos Aram I, stressing the importance of recognizing the first Genocide of the 20th century just as the century?s last Genocide, the Rwandan Genocide, has been recognized by the international community. both leaders underlined the importance of struggling for justice and human rights and the important role of churches in this respect, particularly at such a period when the memories of the Rwandan Genocide are still alive in people?s minds and the Genocide in Darfur is still ongoing in Sudan.

Patriarch Paulos honored Catholicos Aram I with a special luncheon held in the Patriarchate?s hall on 12 July 2007. Over 1000 guests, representatives of Christian and Muslim communities, the Primates of the Ethiopian Church, members of Parliament, ministers and the ambassadors of several countries, as well as the chairman of the small Armenian community, Vartkes Nalbandian, attended the luncheon.

Speaking during the luncheon, His Holiness first praised the services of the Ethiopian Church headed by Patriarch Paulos. He also expressed his joy for the success of his mediation between the Coptic and Ethiopian Churches thanks to the cooperation between the two churches? Patriarchs and their Holy Synods. His Holiness thanked his host for his warm welcome. At the end of the luncheon, the Ethiopian Patriarch gave souvenirs to Catholicos Aram I and his delegation.

A special service dedicated to the 15th anniversary of the Patriarch?s tenure was held on the square at the entrance of the Holy Trinity Cathedral on the same day. A festival with Ethiopian songs and dance was held. All the speakers congratulated the Patriarch on the 15th anniversary of his tenure and greeted His Holiness Aram I?s reconciliatory mission. The Ethiopian Patriarch stressed the important role the Armenian Catholicos plays in ecumenical relations, as well as his success in bringing about cooperation between the Coptic and Ethiopian Churches.

The two spiritual leaders, His Holiness Aram I and His Holiness Patriarch Paulos, left for Egypt on the morning of 14 July 2007, accompanied by their delegations.

Before leaving Ethiopia Catholicos Aram I met journalists and answered to their questions.