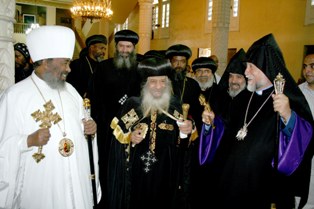 Catholicos Aram I of the Holy See of Cilicia and Patriarch Paulos of the Church of Ethiopia arrived in Cairo on 13 July 2007. Patriarch Paulos was accompanied by a delegation of ten bishops. A delegation of bishops and secular representatives from the Coptic Church welcomed the two spiritual leaders at the airport.

Patriarch Shenouda III, who was in medical care in the United States, had arrived a day before to attend the reconciliation meeting between the Coptic and Ethiopian Churches. Surrounded with bishops, Patriarch Shenouda III greeted Catholicos Aram I and Patriarch Paulos. A public reception in honor of the spiritual leaders was held in the Patriarchate?s large yard, which was decorated with huge images of the three spiritual leaders and words of welcome.

13 July 2007 became a historic day for the Coptic and Ethiopian Churches, whose spiritual leaders, Patriarch Shenouda III (Coptic Church) and Abune Paulos (Ethiopian Church), reconciled in the St. Mark?s Coptic Church in Cairo in the presence of His Holiness Aram I and thanks to his efforts. Metropolitans, Archbishops and Bishops from both churches and a large crowd of believers attended the historic meeting.

Prior to the signing of the Joint Declaration, a service was held in the cathedral. Patriarch Shenouda stressing the historical importance of this meeting and expressing his deep appreciations for the crucial role the Armenian Pontiff played in this initiative. Following the speeches, Metropolitan Bishoy from the Coptic Church, Bishop Nareg Alemezian from the Catholicosate of Cilicia and Archbishop Abba Timothy from the Ethiopian Church read the Joint Declaration which was later signed by the three spiritual leaders.

The Joint Declaration underlines the unity of faith of the Oriental Orthodox Church and the need to preserve and strengthen it with cooperation.

Patriarch Shenouda organized an official luncheon in the evening in honor of the two spiritual leaders and their delegations.

The Oriental Orthodox Family is composed of the Syrian, Coptic, Armenian, Ethiopian, Indian and Eritrean Churches. These Churches have world-wide Diaspora and are active in the ecumenical movement.

Source: Website of the Catholicosate of Cilicia (with adjustments)
http://www.armenianorthodoxchurch.org/

The Coptic and Ethiopian Churches have had serious differences particularly in administrative issues during the last 40 years. These differences have drifted the two churches apart throughout this period. Many spiritual and political leaders tried to find a common ground between them; all attempts, however, remained fruitless.

His Holiness Aram I finally succeeded in reconciling these two churches of the Oriental Orthodox family thanks to his close ties with their two spiritual leaders, Patriarchs Shnouda III and Abba Paulos, and his unending efforts in this respect.

Speaking on behalf of the Synod, Patriarch Paulos thanked Catholicos Aram I for this historical achievement. The Armenian Pontiff then said that despite existing difficulties he continued working with both spiritual leaders to achieve internal unity between the two churches. He said it was the Holy Spirit that drove everyone towards this good work.

In front of the Synod as a witness, Catholicos Aram I and Patriach Paulos then signed a Joint Declaration. Bishop Nareg read the English version of the declaration and Bishop Karima, the Ethiopian version of the document, before it was signed.

Read also: Aram I meets with the President of Ethiopia

Upper-left photo:
His Holiness Pope Shenouda III, Pope of Alexandria and Patriarch of the See of St. Mark (middle), His Holiness Abune Paulos, the Orthodox Patriarch of Ethiopia (left) and Catholicos of Cilicia His Holiness Aram I (right), at St. Mark's Coptic Church in Cairo on Friday 13 July 2007.