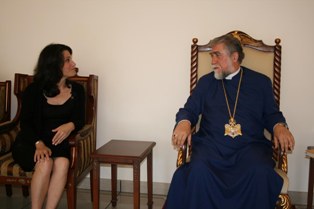 His Holiness Aram I received the director of the new documentary “Screamers“, Carla Garabedian, and the sponsor of the movie, Raffi Manougian, in Antelias on 17 July 2007. Members of the Cilician Brotherhood and the Committee of Defense of the Armenian Cause in Lebanon also attended the meeting.
?
The meeting lasted about an hour. The sides discussed the need to make information on the Armenian Genocide accessible to the public on an international level. Aram I stressed the importance to approach and represent the Armenian Genocide on the basis of contemporary standards. He emphasized that reconciliation should be preceded by recognition of the Armenian Genocide as a historical fact by Turkey.
?
“The issue of the Armenian Genocide faces the imperative of modernization. The world has changed in social, economic, political and other respects. The approaches to securing a just and right solution to the Armenian Cause have also changed. Getting to know those approaches and using them can give a new face and high quality to our struggle on the basis of international standards,” he said.
?
Carla Garabedian spoke about the movie?s distribution and its popularity, particularly due to its contemporary nature. Raffi Manougian emphasized that in today?s constantly changing world new methods should be adopted to win the struggle for recognition.
?
Source: Website of the Catholicosate of Cilicia (with adjustments), 17 July 2007
http://www.armenianorthodoxchurch.org/