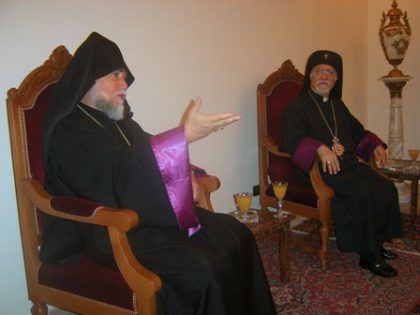 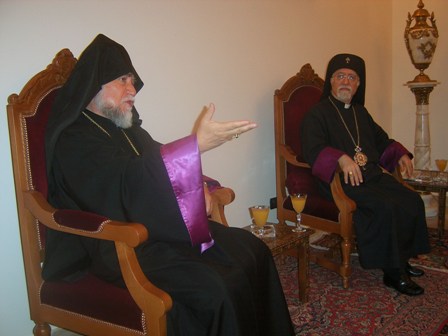 His Holiness Aram I, Catholicos of Cilicia, met with the spiritual leaders of the Armenian Catholic and in two separate meetings on October 30. V. Rev. Fr. Norayr Ashekian, V. Rev. Fr. Krikor Chiftjian and Mr. Tsolag Tutelian from the Central Executive Council of the Catholicosate accompanied His Holiness.

The meeting with Patriarch Nerses Bedros Tarmouni XIX was held in the presence of several Armenian Catholic Bishops and priests. His Holiness then met Rev. Meguerditch Karageozian, President of Armenian Evangelical Churches in the . The President of Haigazian University, Rev. Dr. Paul Haidostian as well as several Evangelical pastors and community leaders also attended.

The main focus of the talks was the relationship between and the Diaspora particularly in light of the Third Armenia-Diaspora conference held this summer in . The three spiritual leaders also discussed the importance of strengthening the Diaspora and reviving Armenian schools in particular. They reiterated the crucial importance of preserving the internal unity of the Armenian community of .

On these and other issues, all three highlighted the role of close cooperation between the Armenian Orthodox, Catholic and and the adoption of united stands towards issues of national concern.

Following these two meetings, His Holiness made the following statement:

?The main purpose of our meetings was the reinforcement of our internal national unity. There might be difference in our approaches and evaluations, but we consider that a natural phenomenon in the life of any nation. However, it is essential that our communities, our nation become united in basic issues affecting our life. Today more than ever, it is imperative that we gather around pan-national projects and visions.?

?The Catholicosate of Cilicia and We personally in cooperation with the ?Gulbenkian?, ?Lincy? and ?Khatchig Babikian? Foundations, are striving to keep the Armenian school strong in its educational mission. Financial assistance alone, however, is not enough. It is our expectation that Armenian parents send their children to Armenian schools. An Armenian school becomes truly an when it is filled with Armenian students; when it conveys the Armenian language, religion and history as a spirit, faith and commitment to Armenian students, making them the pillar of Christian Armenian formation. Therefore, Christian education and Armenian education for us, are closely interconnected; they are two dimensions of one process?, said His Holiness Aram I. 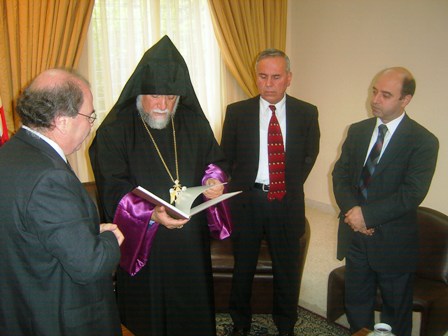 Source: Press Release by the Armenian Catholicosate of

1. His Holiness Aram I meeting with the Spiritual Leader of Armenian Catholic church His Beatitude Nerses Bedros XIX Tarmouni Patriarch.

2. His Holiness I meeting with the President of Armenian Evangelical Churches in the Near East Reverend Megerdich Karagoezian.