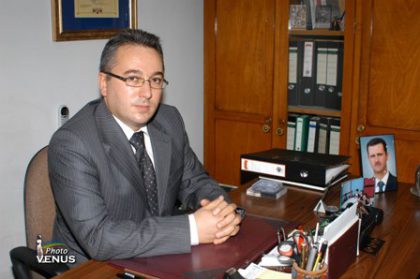 In a friendly and warm atmosphere I met Avedis Bakkalian, the Principal of Lazar Najarian ? Calouste Gulbenkian Central High School (AGBU) in his office. He is a very energetic, enthusiastic and active young man driven by his love to his school, to the Armenian language and literature, determined to modernize the school, preserving meantime its image in the Diaspora.

The school has a kindergarden, elementary, secondary and high school sections. It is one of three Armenian high schools in .

Bakkalian was born in in 1969, graduated from the same school. He holds a degree in “Business Administration” from . Later he has followed one-year-courses in “Educational Administration” at in . He was assigned Principal in 2004. In the past he was offered headmaster's position in other Armenian schools in , but he has favored the current proposal mainly due to the fact that he is a graduate of the school, where he had spent 15 years as a student and an additional year as a general accountant. Those years created in his heart a strong bond with his school and made him closely interested and worried about its future after the passing away of the late Principal, Alexan Attarian, whose memory is kept alive in the students' hearts. Every year on “Teacher's Day” Bakkalian, accompanied with a group of teachers and students, visits the cemetery and lays flowers in memory of Attarian and other teachers.

Bakkalian referred to the difficulties facing the school. He compared the school to a structure based on the cooperation and the good will of different groups (administration, teachers, employees, students, etc.), surrounded by other circles of people (parents, AGBU, Ministry of Education, the larger Armenian community, etc.). Each group has its own demands and expectations. It is difficult to satisfy all parties. The difficulties are specially highlighted at the beginning of the school year.

Bakkalian informed me that the school has two branches: “literature” and “science”. A student can make the choice to follow one of the two branches at the 11th grade. The school uses Armenian textbooks (“Mayreni Lezu“, published in ). Bakkalian admitted that it is not the ideal textbook. The school administration is searching an alternative textbook which does not have political direction.

?s Foreign Minister Vartan Oskanian visited this year and had the chance to see the school where he first studied. His visit left a deep impact on the students, who all were touched with his personal example. He told them “No wonder if this school produced a minister, it can also produce a president”.

The school participated in the celebrations of the 100th anniversary of AGBU. On this occasion several contests in poetry, singing and prose writing were organized and prizes were distributed to the students during a memorial ceremony at the school theatre.

I was interested to know if students from other Armenian 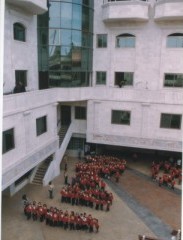 schools join . Bakkalian informed me that there are two main reasons for students joining the school: living in close proximity to the school and preferring the teaching system applied there.

He pointed out that the number of students in Armenian schools in has dropped during the current school year, due to different factors, such as the immigration of Armenians from seeking better living opportunities abroad; the opening of new schools with international curriculum and finally the tremendous increase of the school tuitions.

received this year only 73 new students at the entry level of the kindergarten. The total number of students at all levels during the 2006-2007 school year is 1434; the only school in Diaspora having such a great number, with a total of 154 employees.

I would like to thank Principal Bakkalian for his time and for the information he provided. I would like also to wish him all the best in leading this huge institution, where Armenian children are educated and raised to feel as proud members of the society.