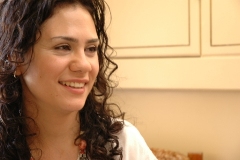 Azad-Hye, Dubai, 30 October 2006: “Asharq Alawsat” pan-Arab daily's reporter has signed an interesting article in the 11 October 2006 issue of the newspaper under the title “ returns back to the Oriental music”.

In the report Lilas Hatahet quotes the example of Lena Shamamian, a young Syrian-Armenian who has just produced her first CD album of Arabic traditional songs with modern flavor.

Shamamian is a graduate of Aleppo Institute of Music and currently a student in the Higher Institute of Music in .  In September 2006, together with colleague Basel Rajjoub, she won the Radio Monte-Carlo 1st Musical Prize, at a contest in . The event was sponsored by the European Commission. Soon afterwards Shamamian and Rajjoub completed a tour of European cities and performed in the Arab World Institute in on 17 October 2006, under the guidance of maestro Saoud Masi.

In the “Asharq Alawsat” report Hatahet says: “Some young people believe that blending oriental and western music will create a mutual language of communication and dialogue between the two cultures. This is what Lena Shamamian believes too. She has worked on several Arabic traditional songs (Ya Mahla el-Fouseha, Alrouzana, Hal Asmar Elloan, Ya Mayla Al'Ghousn, Bali Ma'ak, etc.) and produced an album with a new style, preserving the original identity of these songs and hoping to create a bridge of communication using elements from both cultures”.

affirms “everything around us is in constant change, we cannot avoid progress. What I aspire is to achieve harmony between the two cultures in an environment of mutual exchange, without undermining the original identity of the oriental music, which in fact fascinates me. This music depends highly on rhythm, while the western music depends mainly on musical notes. I aim at integrating both styles in a scientific way” (see sample of her song below).

Hatahet comments: “Has Shamamian managed to create a new formula after fusing jazz, Armenian and classical western music and pouring all these elements into an oriental musical frame? Maybe the purchase of more than 2 thousand copies of her CD in two days by the Syrian public and the presence of 2500 attendants at her musical recital (which took place in the Citadel of Damascus this summer) are both positive indications about how the public perceives her works”.

The Songs I Love

Fusing oriental classics with jazz music, ?s young chanteuse Lena Shamamyan started her career by reviving golden oldies from the heyday of the .

When 's Lena Shamamyan gave up working with economics, the musical world gained one of its fastest rising talents. But Shamamyan is light years away from the current crop of pouting pop-stars, bopping along to computer generated musical backing. Her entry to the world of music comes at a completely different level, and reflects her genuine desire to revive some of the forgotten classics of the past.

Much loved old-time Syrian songs such as Ya Mahla el-Fouseha (What a Nice Picnic); Hal Asmar Elloan (Oh Brown Boy); and Bali Ma'ak (My Mind is with You) got a modern makeover when Shamamyan sang them with big band backing at the Syrian Jazz festival in Damascus and Aleppo last month. These songs, popular during the 1940s and 1950s and sometimes earlier, were largely forgotten, or at least remembered only as golden oldies until Shamamyan dusted them off.

?I was lucky to know these classical songs from the theatre and TV programmes, but I was worried that the coming generations would not know them.? Shamamyan tells me when I meet her after the opening night. She says along with reviving this genre of folkloric music she also wants to revive musical theatre in , the place where she herself first heard these songs.

Lena Shamamyan performed in her first show when she was just five years old. Singing popular children?s songs; she could not have known that this first concert would sow the seeds of music and performance in her. After graduating from the economic college, Shamamyan decided to study music at the Higher Institute of Theatre and Music in . ?I could not go on with economy; I was obsessed with singing and people encouraged me a lot to sing, so I did,? smiles the talented young woman.

Almost exactly one year ago, Shamamyan released her first CD. It contained songs from the Syrian coastal region and from Damascene folklore. In the first four days, she sold about 1000 copies. ?It was my graduation project, it was selected by the Higher Institute of Music from among 200 projects of other students,? says Shamamyan. ?I was so happy that both youth and old people liked it,? she said.

Shamamyan?s style is to mix classical Syrian songs with western jazz music whenever she performs. Oriental instruments such as the Oud and the Qanoun dialogue with western instruments like saxophones and drums ? producing a harmony that touches your heart.  ?I love jazz,? enthuses Shamamyan. ?It is the music of freedom and it has a great hospitality for all other different kinds of music.?

At a time when grows more and more internationally isolated, Shamamyan is still optimistic about spreading the message of love from to the world. ?My message is completely cultural. I want to tell the world that the nation is not for revolution or war, but rather peace and love,? says the singer. ?We live at peace, have warm relations and these details of our lives are reflected in our folklore,? she added.

The warm and talented young woman, half Syrian half Armenian who hails from ??? was the only Syrian selected in an Arabic singing competition launched by the France-based radio station Radio Monticarlo. In August, she will head again to with competitors from and to compete for first prize. However, success rarely pays its own way at first.  Shamamyan knows that there are still many difficulties to face.

?I do have a problem with funding,? says Shamamyan. ?I was disappointed that my project of reviving Syrian folkloric music was not financed by the government, after private companies refused to take the risk of funding it.?

Shamamyan can?t claim all the glory for herself however. She clearly acknowledges her debt to her musically inclined family ? her father is a saxophonist and her mother a singer who offered both love and support to her throughout her life, knowing that other people may have frowned on their daughter?s choice of occupation. ?I needed support, as well as people?s love,? Shamamyan tells me. ?In the end, I simply want to sing the songs I love.?