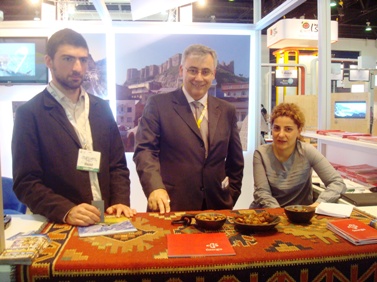 Armenia was again absent from the Arabian Travel Market (ATM), the most important regional tourism exhibition in the Middle East, which was held this year in Dubai from 2-5 May.

From the Caucasus region, both Georgia and Azerbaijan had distinct national stands. Maia Sidamonidze, Chairwoman of the Georgian National Tourism Agency said that tourism is one of the rapidly developing fields in Georgia. This was the second time Georgia takes part in ATM. The country's scenery, national culture and modern accommodation amenities were highlighted.

“Our aim is to attract high income locals and residents of UAE and neighboring countries to Georgia this summer, especially that the people in this region are looking this year for new places to visit”, Sidamonidze said to Azad-Hye. Traditional tourism destinations like Egypt, Tunisia, Lebanon, Syria, etc., have suffered from the recent political unrest.

On the first day of the exhibition, Qatar Airways Chief Executive Officer Akbar Al Baker announced the expansion of the airline's network to the Caucasus with scheduled flights to Tbilisi and Baku.

Culture and Tourism Ministry of Azerbaijan had its own stand in the Arabian Travel Market for the fourth year in a row. The stand was busy during the exhibition. A team of four dancers attracted visitors who made further enquiries about the country. The stand was supplied with a great number of English and Arabic brochures, including specialized booklets on cuisine, carpets, heritage locations, etc.

Earlier in Baku Azerbaijan's Minister for Culture and Tourism Abulfaz Garayev announced that his country has seen an increase of scheduled flights from the Middle East and a surge of visitors from Gulf Cooperation Council countries. “In order to conduct the extended marketing and public relations activities planned for the region, we are delighted to announce the opening of our representative office in Dubai”, he said to Khaleej Time's journalist Jamila Qadir, herself a native of Azerbaijan. The Minister added that the opening of the office is a proof of the importance of the Middle East developing market for Azerbaijan.

Azerbaijan senior tourism officer Vugar Shikhammadov said to Azad-Hye that without solving the Karabakh problem there would be no cooperation between Azerbaijan and Armenia in tourism or any other sector.

During the exhibition we met Maya Tokhalyan, the General Manager of SacVoyage Travel Agency from Yerevan (www.sacvoyage.am), with whom we had the following interview:

– How did you hear about ATM?

I always watch for tourist events in the world and try to visit the important ones. ATM is an exhibition not to be missed.

– Do you think that Armenia should have a stand there? How can this be achieved?

Of course, I really wish that to happen! I think we have to promote our wonderful country in this exhibition. I wish Armenia will participate next year 2012. If this happens my company will have an active presence in the Armenian stand.

– What do you feel about this year's incoming tourism activity to  Armenia?

It is growing! People who have previously been to Armenia are now recommending the country to their friends and relatives. They are always back, as a rule. This year we are expecting a tourism growth of 10% in Armenia. And I hope we will have good results in the coming years too.

ATM (since 1991) is held under the patronage of the Ruler of Dubai Sheikh Mohammed bin Rashid Al Maktoum, Vice-President and Prime Minister of the United Arab Emirates. It is the industry's leading travel and tourism exhibition in the region.

Below picture: A huge map covering the wall of the Azerbaijani stand, where Karabakh is represented as territory occupied by Armenia: 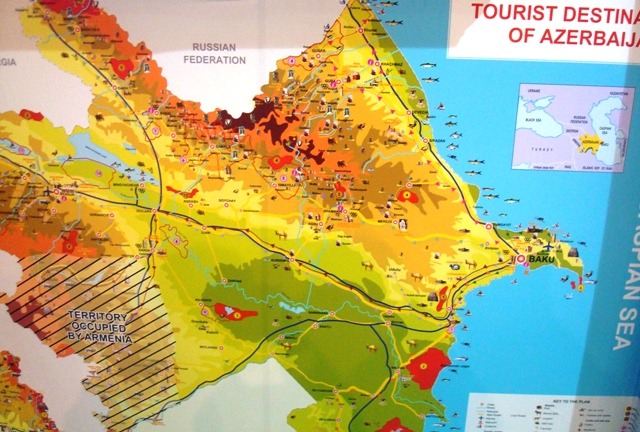