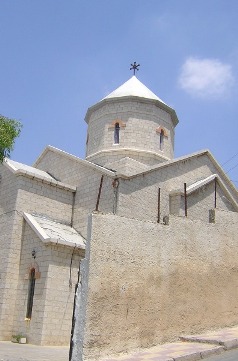 We recommend the opening of Embassy of Armenia in Amman

On 04 August 2011 the government of Armenia ratified the agreement signed with Jordan on cooperation in agricultural area. The agreement aims at exchanging expertise in irrigation technologies, seed production, cattle breeding, etc.

Cooperation in the irrigation projects can be beneficial for both sides. Armenia has abundance of water resources but is not able to use all resources for the benefit of agriculture due to the lack of financial and technological capabilities. Jordan on the contrast is a country that suffers from lack of water supplies and needs to find ways to maximize the use of existing resources.

Cooperation on science and education area

The government of Armenia also approved an agreement on cooperation in science and education. During the cabinet's regular meeting on Thursday 04 August 2011, Deputy Minister of Science and Education Manuk Mkrtchyan highlighted the experience of Jordan in reforming the educational system, attracting investment in educational area and creating an educational hub for students from the Middle East including Gulf countries. He said that the experience of Jordan could be beneficial for Armenia, a country that is trying to promote itself as an educational destination for students especially from Asian countries.

Opening of Embassy of Armenia in Amman is necessary

According to Azad-Hye sources there are 3-4 thousand Armenians in Amman and other locations in Jordan. The Embassy of Armenia is located in Damascus, Syria, about 180 kilometres away from the Jordanian capital. The non-resident Ambassador is HE Arshak Poladian.

Unfortunately the distance is not helping the Embassy in following events in the Jordanian scene or reaching to Jordanian Armenians. The communication has recently deteriorated after the eruption of tensions in Syria.

In order to enhance the Armenian-Jordanian relations an Embassy of Armenia should be opened in Amman. Both Georgia and Azerbaijan have their embassies in the city. Azerbaijan is manipulating the absence of Armenian Embassy by circulating anti-Armenian propaganda in the local newspapers and trying to influence Jordanian officials on Armenian-Azerbaijan issues.

Another reason for opening of the Embassy in Amman is facilitating the Armenian citizenship applications. The Jordanian-Armenians now are obliged to submit their applications in Damascus. Few years ago an official from the Armenian Embassy in Damascus has come and lectured them about the citizenship applying procedures, but since then no one has contacted or informed them about any updates.