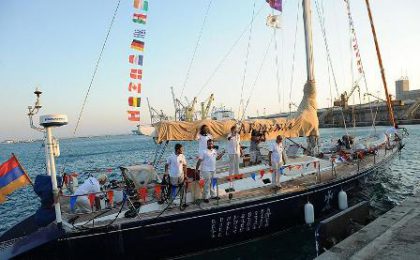 In July – August 2011 the last phase of “Armenia” sailboat's round the world journey covered the distance between Sri Lanka and Cyprus.

On 18 July 2011 the sailboat docked in the port of Galle in Sri Lanka, about 115 kilometres away from the capital Colombo. Very Rev. Father Khoren Hovhannisyan, Pastor of Armenians in India flew to Sri Lanka to offer a thanksgiving prayer (see photo below). Ambassador of Armenia to India Mr. Ara Hakobyan also participated in the special occasion.

From 21-24 July 2011 Ambassador Hakobyan and the crew of the sailboat visited Kolkata, where Father Hovhannisyan conducted 'repose of souls' service in St. John the Baptist Church, Chinsurah where Prince Fridon Beglarov, the last heir of Gyulistan (Historical Artsakh) is buried.

The crew visited also the Armenian College and Philanthropic Academy in Kolkata where they met the students and teachers of the institution. Other visits included the Armenian Old Age Home of Kolkata and Mother Teresa?s Home where her tomb lies.

After a journey of two weeks the sailboat reached La Marina Dbayeh in Beirut, Lebanon. On 08 August 2011 the crew visited His Holiness Catholicos Aram I in St. Mary's Monastery in Bikfaya. Ambassador of Armenia to Lebanon Mr. Ashod Kotcharian, introduced the crew to Catholicos Aram. The captain presented the flag of the Cilician Kingdom to the Catholicos. Aram I thanked the captain and said that the Catholicosate of Cilicia through its mission in the Diaspora is a constant reminder of Cilicia.

After a two-year trip that started on 28 May 2009 from Valencia, Spain, the sailboat “Armenia” reached its final destination in Limassol, Cyprus on 11 August 2011. Presidents Demetris Christofias of Cyprus and Serzh Sargsyan of Armenia attended the ceremonies (see President Sargsyan's message on this occasion below). Sargsyan took the opportunity to express his condolences to Cyprus on the tragic events at Mari naval base. “It is a great honour for such trip to end in Cyprus, a symbol of the excellent relations between Cyprus and Armenia”, President Christofias noted.

Addressing the crew, President Sargsyan said: “You have not only conducted the around-the-world voyage, sailed across three oceans and dozens of seas but have also crossed hard roads of Diaspora in different corners of the world to bring Motherland's spirit to our communities, giving new meaning to the formula of our identity and to our world-spread cultural heritage”.

The two Presidents attended a festive concert and toured the sailboat accompanied by Zori Balayan.

The crew consists of eight Armenians including the head of the expedition Dr. Zori Balayan, a renowned author, traveller and human rights activist. Its mission is to increase world awareness about the Armenian nation, once a significant seafaring people with more than 1000 ships in 24 big ports of the Kingdom of Cilicia (1080-1375), which had special ties with Lusignan Cyprus.

On August 11, the President of Armenia Serzh Sargsyan and the President of the Republic of Cyprus Demetris Christofias at the port of Limassol attended the official ceremony dedicated to the conclusion by the Armenia sailboat of her around-the-world voyage.

I am happy to address you all on this symbolic occasion. It is symbolic since after almost a two-year voyage, the Armenia sailboat has concluded her around-the-world voyage traveling down the routes of Spyurk. It is also symbolic because brotherly Cyprus has become the last point and destination for this round the world voyage. I am truly delighted by the fact that this event has reaffirmed that the friendship of the Armenian and Cypriot peoples has deep roots. We are friends in good as well as difficult times. In Armenia, we learned with great anguish the news of the explosion at the Evangelos Florakis marine base, and at this point I would like to ask you to join me in a moment of silence to pay tribute to the memory of the victims.

Now, I address my words to our dear seamen; every one of them is endowed with the outstanding will power and great national dignity, high professionalism, patriotism, determination, and courage. It is proved by your almost two-year long heroic act, which is completed by the honorary anchoring of your ship here, in the territorial waters of brotherly Cyprus.

Your heroic deed has become an excellent epitome for the collective image of the Armenian man, who went through a long and tough journey, never succumbed to hardships but overcame and rightly earned the right to live an independent and dignified life.

I have been following closely the first in our history circumnavigation, read messages sent to us from different parts of the world, shared your hopes and troubles. You have not only conducted the around-the-world voyage, sailed across three oceans and dozens of seas but have also crossed hard roads of Spyurk in different corners of the world to bring the spirit of the Motherland to our communities, bestowing new meaning to the formula of our identity and to our world-spread cultural heritage.

Even before the voyage, this idea by the head of the expedition, Zori Balayan inspired me immensely. And it is not merely about conducting a round-the-world voyage but, first of all, about the scientific expedition which carries the name of the inventor of the Armenian letters Saint Mesrop Mashtots. It holds its own significance: thanks to these very letters the Spyurk has been able to preserve our language, our church and our national traditions ? our identity.

It is also very emblematic that the voyage has been dedicated to the Armenian mothers. The pictures of the mothers of the seamen in the cabin of the crew have supported them in difficult moments of the voyage, just like Armenian women have been preserving the eternity of their hearths throughout our thorny and intricate history.

I can well understand how difficult it was for you to reach our Armenian communities, meet with our compatriots and accomplish the task of gathering historical and culture related material on five continents right according to the timetable. You have made photographs of many Armenian churches, monuments, schools and old cemeteries all over the world and it is commendable.

I also know that in this voyage you carried with you not only our state symbols but also the amphora full of native soil and names of our immortal heroes who fell in the Artsakh war for justice and freedom. There can be no doubt that without our immortal heroes there could be no pan-European voyage of the Cilicia sailboat or this around- the-world voyage of the Armenia. Voyages of the Cilicia and the Armenia bring back historical memory about journeys made by our forefathers when Armenian vessels had been ploughing the expanses of the sees. Today, Armenia is a land-locked country; but even today we have many sons who subdue the seas, oceans and elements to their willpower.

I want to name them all, our courageous seamen: Zori Balayan, Samvel Karapetian, Armen Nazarian, Hayk Badalian, Samvel Babayan, Moushegh Barseghian, Vahan Matevossian, Sargis Kouzanian and the departed Samvel Sarkissian. Thank you all for bringing this honorable mission to its glorious conclusion. Let courageous spirit and endurance always stay with you. My dear friends, be always healthy and happy and let all your future endeavors be as patriotic as this one. God bless you all and your just cause. The Fatherland is proud of your heroic deed.