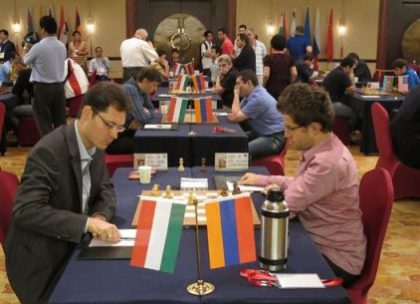 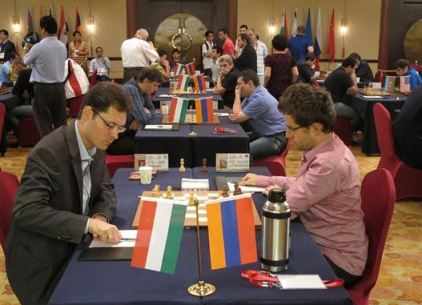 The championship, held in the eastern Chinese seaport of Ningbo on July 15-26, was contested by the national teams of the world's 10 leading chess countries and also included 2009 champion Russia, Azerbaijan, India, the United States, Egypt, Israel, and Hungary.

The Armenian team was led by Levon Aronian, the world's third-ranked player, and it dominated the 12-day tournament by winning five games and drawing four others.

It clinched the title with a draw against Ukraine and also drew against rival Azerbaijan, which finished seventh in the competition.

The Armenian team was made up mainly of players who won two consecutive world Chess Olympiads in 2006 and 2008. Those victories earned them phenomenal domestic stardom.

Chess has been one of Armenia's most popular sports since Tigran Petrosian, a Tbilisi-born Armenian, became a world champion in 1963. The country currently boasts one of the largest per capita numbers of chess grandmasters in the world.

Two of Armenia's three post-Soviet presidents are active chess players who have promoted the game while in office.

The Armenian National Congress, an opposition grouping led by former President Levon Ter-Petrossian, was quick to welcome the “brilliant” victory in Ningbo.

Vanik Zakarian, the honorary chairman of the Armenian Chess Federation, called the championship a “great result.” He added that “our team has been considered a major contender in all chess competitions in recent years.”

Zakarian said the team championship victory was no less significant than the Olympiad title.

“What makes Chess Olympiads different is that all [countries] compete in them, whereas only the selected best teams take part in the world championships,” he told RFE/RL.

Photo: Armenia takes on Hungary at the 8th World Team Chess Championship in China on 24 July 2011.