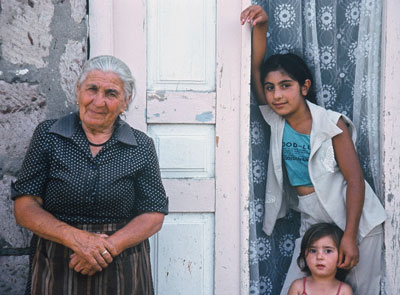 In a bid to boost economic development, has unveiled an ambitious plan to enlist the support of the country?s Diaspora population to promote the revitalization of border villages. Representatives of the Diaspora have reacted positively to the plan, but conditioned their support on a government commitment to democratic principles.

“The development gap between and the marzes (provinces) remains one of the key challenges of modern ,” President Robert Kocharian said in opening a three-day conference of Diaspora members in on September 18. Though ?s economy has posted double-digit growth for the past five years, , with one-third of the country?s population of roughly 3 million, produces more than half of its Gross Domestic Product. Poverty is higher outside of the capital, and migration a severe problem, with some remote regions facing depopulation.

To reverse that situation, the Armenian government is looking to the Diaspora to take on responsibility for the rehabilitation of roads, irrigation systems, schools, and leisure facilities in 50 villages along the frontier with , , and . “We expect that, after restoring the rural infrastructures, [the villages] will become more attractive for investors, and moreover, hopefully, part of the population who left those villages may return,” Foreign Minister Vartan Oskanian told conference attendees.

The government sees the sponsorship of 50 border villages by Diaspora communities, organizations or individuals to act as the first stage of rehabilitation for all of ?s 159 border villages, Oskanian said. The average cost of meeting a village?s needs is estimated from $500,000 to $700,000. According to the minister, the government has already received sponsorship pledges for over 30 villages, and hopes that all 50 villages will find sponsors by March 2007. The of Manufacturers and Businessmen of Armenia has also announced plans to sponsor one border village.

has long looked to its Diaspora, at least twice the size of the country?s own population, to provide investments and various forms of assistance. The Diaspora, in turn, has looked to for inspiration in preserving a sense of national identity and heritage. Two previous conferences, in 1999 and 2002, elaborated various ideas for preserving Armenian national unity, but without advancing concrete initiatives.

Much of the motivation for Diaspora members? pledge of support at this year?s conference comes from the border regions? strategic status as a potential frontline in what many conference participants termed Armenia?s new, “economic war” with neighboring, oil-rich Azerbaijan. The proposal has received the support of all Diaspora-connected political parties and all of the country?s principal religious organizations.

“Initially I thought that they again are just asking the Diaspora to give money,” conference participant Samvel Shnothogian told Armenian public television, referring to government officials. “But I saw that they are sincerely interested in getting a real outcome.” The government has also indicated that all options are open for implementation of the plan, including having Diaspora sponsors directly manage the future rehabilitation of all 159 border villages.

Diaspora members, however, had their own demands for the government. Most conference speakers stated that they expect the Armenian government to take decisive efforts to meet democratic standards. Failure to satisfy this expectation would prevent a deepening of Diaspora involvement in development projects. Current Diaspora investment in is estimated at between $200 million and $300 million. “Diaspora Armenians need a new inspiration and this inspiration can be provided by only. But not by this ,” Petros Terzian, a French Armenian, said at the conference?s closing session. “We need a democratic, fair country, free of corruption. If you [local Armenians] fail to create such an , we [the Diaspora Armenians] cannot do it either.”

With the exception of Foreign Minister Oskanian, most Armenian government officials at the conference avoided discussing this topic. The minister, who is expected to run for president in 2008, cited corruption and the ability “to hold free and democratic elections” as among the “internal challenges” that face Armenia along with the “external challenges” created by the operation o the Baku-Tbilisi-Ceyhan oil pipeline and growing cooperation between Azerbaijan and Turkey.

While details about implementation of the Diaspora-sponsored village program remain undefined, international organizations have recently provided the government with fresh impetus for revitalization of ?s border regions.

Three large-scale programs totaling around $40 million and supported by the World Bank, the Organization for Security and Cooperation in and the United Nations Development Program have been approved to boost the development of rural areas, according to Agriculture Minister David Lokian. Later in 2006, a $235 million rural infrastructure program financed by the US Millennium Challenge program, and a project financed by Armenian American billionaire Kirk Kerkorian?s Lincy Foundation will also start work in the regions. The government maintains, however, that these programs alone are not sufficient to cover the rehabilitation needs of rural .

In apparent recognition of that assistance, representatives of foreign donors such as the United States Agency for International Development, the Millennium Challenge Corporation, and the Organization for Security and Cooperation in , among others, were invited to the conference for the first time.

Haroutiun Khachatrian is a Yerevan-based writer specializing in economic and political affairs.