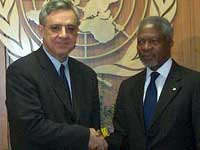 On 25 September 2006 Foreign Minister of the delivered a speech at the 61st session of UN General Assembly.

Below is the text of the speech

It is a pleasure to congratulate you and to wish you a year that is relatively free of crises and catastrophes. In other words, a year not like the one we?ve just had during which my good friend Ian Eliasson successfully navigated through troubled waters.

The year of turmoil, as he called it, included conflicts, as well as man-made and natural disasters that required our collective response. These challenges to our united will are becoming more numerous, more dangerous and more complex.

Of all the events last year, the one which stood out most tragically was the war in . There I believe we lost a great deal of credibility in the eyes of the peoples of the world who had a right to expect that political expediency would not prevail. We watched with great disappointment and dismay the political bickering within the Security Council and the reluctance to bring about an immediate ceasefire, even as the bombs were being dropped indiscriminately. When any world body or power loses moral authority, the effectiveness to undertake challenges which require collective response is undermined.

In other areas, a united international community has succeeded. It has played a supportive role in the civilized process which brought to this day and this body. Together, we created and empowered the Peace building Commission and the Human Rights Council – two bodies which hold great promise in delivering deeper and more purposeful engagement by a world community committed to building peace and protecting human rights.

The most insipid and threatening challenges in the world remain those of poverty and hopelessness. When the world's leaders met six years ago, they decided that the UN was the ideal mechanism to confront the social ills facing our societies, they publicly accepted their combined responsibility in achieving accelerated and more even social and economic development. They said to the world that, together, we will channel international processes and multinational resources to tackle the most basic human needs. Thus, they placed the principle and potential of united action on the judgment block. Six years later, the world continues to watch in earnest to see if individual and regional interests can be rallied in striving for the common good.

We are faced with the same challenges, locally. In , we are encouraged and rewarded by our extensive reforms. These reforms are irreversible and already showing remarkable results. We are going to move now to second generation reforms in order to continue to register the successes of the last half decade: legislative and administrative strides forward, an open, liberal economy, double-digit growth.

Encouraged by our own successes, this year we have determined to build on our course of economic recovery and target rural poverty. We are reminded of the remarkable promise made to the victims of global poverty in 2000: “To free our fellow men, women and children from the abject and dehumanizing conditions of extreme poverty.” To do this at home, we will leverage the philanthropy of international organizations and friendly governments with the traditional generosity of our Diaspora to build and repair infrastructure, which is essential to facilitate and enable economic development.

But infrastructure alone does not reduce poverty and remove unjust inequalities. Creating economic opportunities, teaching the necessary skills – these are essential to erase the deep development disparities that exist today between cities and rural areas.

Madame President, we will begin in our border communities, because unlike other countries, where borders are points of interaction and activity, 's borders to the east and the west remain closed. As a result, regional economic development suffers.

But with , it is more than our economies that suffer. It is the dialogue between our two peoples that suffers. 's insistence on keeping the border closed, on continuing to prevent direct contact and communication, freezes the memories of yesterday instead of creating new experiences to forge the memories of tomorrow. We continue to remain hopeful that will see that blocking relations until there is harmony and reciprocal understanding is really not a policy. On the contrary, it's an avoidance of a responsible policy to forge forward with regional cooperation at a time and in a region with growing global significance.

Madame President, let me take a minute to reflect on Kosovo, as so many have done. We follow the Kosovo self-determination process very closely. We ourselves strongly support the process of self-determination for the population of Nagorno Karabakh. Yet, we don't draw parallels between these two or with any other conflicts. We believe that conflicts are all different and each must be decided on its own merits. While we do not look at the outcome of Kosovo as a precedent, on the other hand, a Kosovo decision cannot and should not result in the creation of obstacles to self-determination for others in order to pre-empt the accusation of precedence. Such a reverse reaction – to prevent or pre-empt others from achieving well-earned self-determination – is unacceptable.

Efforts to do just that – by elevating territorial integrity above all other principles – are already underway, especially in this chamber. But this contradicts the lessons of history. There is a reason that the Helsinki Final Act enshrines self-determination as an equal principle. In international relations, just as in human relations, there are no absolute rights. There are also responsibilities. A state must earn the right to lead and govern. States have the responsibility to protect their citizens. A people choose the government which represents them.

The people of Nagorno Karabakh chose long ago not to be represented by the government of . They were the victims of state violence, they defended themselves, and succeeded against great odds, only to hear the state cry foul and claim sovereignty and territorial integrity.

But the government of has lost the moral right to even suggest providing for their security and their future, let alone to talk of custody of the people of Nagorno Karabakh.

did not behave responsibly or morally with the people of Nagorno Karabakh, who it considered to be its own citizens. They sanctioned massacres in urban areas, far from Nagorno Karabakh; they bombed and displaced more than 300,000 Armenians; they unleashed the military; and after they lost the war and accepted a ceasefire, they proceeded to destroy all traces of Armenians on their territories.

In the most cynical expression of such irresponsibility, this last December, a decade after the fighting had stopped, they completed the final destruction and removal of thousands of massive hand-sculpted cross-stones – medieval Armenian tombstones elaborately carved and decorated.

Such destruction, in an area with no Armenians, at a distance from Nagorno Karabakh and any conflict areas, is a callous demonstration that 's attitude toward tolerance, human values, cultural treasures, cooperation or even peace, has not changed.

One cannot blame us for thinking that is not ready or interested in a negotiated peace. Yet, having rejected the other two compromise solutions that have been proposed over the last 8 years, they do not want to be accused of rejecting the peace plan on the table today. Therefore, they are using every means available – from state violence to international maneuvers – to try to bring the Armenians to do the rejecting.

But is on record: we have agreed to each of the basic principles in the document that's on the table today. Yet, in order to give this or any document a chance, can?t think, or pretend to think, that there is still a military option. There isn?t. The military option is a tried and failed option. Compromise and realism are the only real options.

The path that Nagorno Karabakh has chosen for itself over these two decades is irreversible. It succeeded in ensuring its self-defense, it proceeded to set up self-governance mechanisms, and it controls its borders and its economy. Formalizing this process is a necessary step toward stability in our region. Dismissing, as Azerbaijan does, all that?s happened in the last 20 years and petulantly insisting that things must return to the way they were, is not just unrealistic, but disingenuous.

Madame president, Nagorno Karabakh is not a cause. It is a place, an ancient place, a beautiful garden, with people who have earned the right to live in peace and without fear. We ask for nothing more. We expect nothing less.”

Newer PostArmenia to Diaspora: It takes a global village
Older PostPetition for Lachin (lifeline corridor between Karabakh and Armenia)