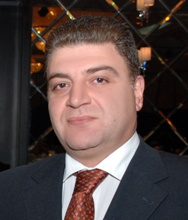 Ambassador Melikian: We are seeking active cooperation with the UAE in the renewable energy sector.

Armenia, a founding member of the International Renewable Energy Agency (IRENA), has decided to vote for the United Arab Emirates (UAE) in its bid to home the IRENA headquarters in the capital city of Abu Dhabi.

“The Armenian government has taken the decision to support the UAE”, H.E. Vahagan Melikian, Ambassador Extraordinary and Plenipotentiary of Armenia to the UAE and Kuwait said in an interview with Dubai English daily “Gulf News”. “IRENA will have detailed plans to support the countries to develop renewable energy sources and the UAE can do a lot by hosting its headquarters,” he added.

“We are seeking active cooperation with the UAE in the renewable energy sector as the country is a frontrunner in the sector,” Melikian emphasized.

“The Masdar initiative and The UAE's IRENA bid prove that the leadership is psychologically and philosophically ready to face the future challenges in the energy sector,” according to Melikian.

The UAE has been extensively lobbying to host the IRENA in Abu Dhabi, the location also for the Abu Dhabi Future Energy Company (Masdar). However, the campaign is facing stiff competition from other countries, including a few European cities. The host country will be decided in a meeting scheduled for the Egyptian resort town of Sharm Al Shaikh in June 2009.

The Chief Executive of Masdar, Dr Sultan Al Jaber recounted the advantages of having the IRENA headquarters in Abu Dhabi, saying that the capital's great capability will help achieve the objectives of IRENA worldwide. He assured that Abu Dhabi government will give IRENA the greatest care and support it needed to achieve its objectives.

The International Renewable Energy Agency (IRENA) is an intergovernmental organisation focusing on renewable energies. It concentrates on alternative energies in both industrialised and developing countries. Its main goal is a rapid transition towards the widespread and sustainable use of renewable energy worldwide. In this regard, IRENA will increase the contribution of renewable energy to environmental and climate protection, economic growth, and social cohesion, including poverty alleviation and inter-generational equity.