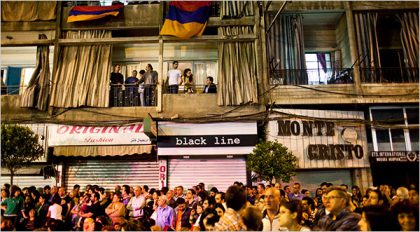 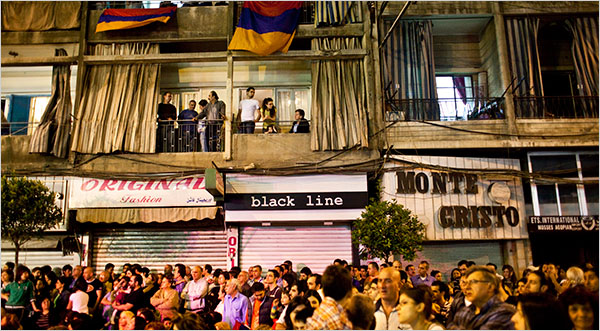 By Robert F. Worth

BEIRUT, Lebanon ? Their political apparatus is a model of discipline. Their vast array of social services is a virtual state within a state. Their enemies accuse them of being pawns of Syria and Iran.

They are the Armenian Christians of Lebanon, one of the Middle East?s most singular and least-understood communities. And if they sound a bit like Hezbollah, the Shiite militant group based here, that is no accident.

Last month, the main Armenian political bloc decided to support Hezbollah?s alliance in the coming parliamentary elections in Lebanon against the pro-American parliamentary majority. Because of their role as a crucial swing vote, the Armenians could end up deciding who wins and who loses in what is often described as a proxy battle between Iran, Hezbollah?s patron, and the West.

That fact has brought new attention to the Armenians, a distinct and borderless ethnic group that is spread throughout the region much as the Jews once were. In Lebanon, they have their own schools, hospitals and newspapers. They speak their own language, with its own alphabet. Their main political party, Tashnaq, operates in 35 countries and has a secretive world committee that meets four times a year. Their collective memory of the genocide carried out against them in Turkey from 1915 to 1918 helps maintain their identity in a far-flung diaspora.

?There is a sense of invisible nationhood across borders,? said Paul Haidostian, the president of Haigazian University, the Armenian university in Beirut.

In fact, their political enemies here accuse the Armenians of siding with Hezbollah in order to protect the substantial Armenian populations in Syria and Iran. But the Armenian political leadership says it is fully independent and has no ideological sympathy for either of Lebanon?s two main political camps.

Instead, the Armenians say, they are voting with the opposition for reasons that are entirely local and pragmatic: it offered them full control over the parliamentary seats in Armenian-dominated districts. The other side did not, said Hovig Mekhitarian, the chairman of the Lebanese branch of Tashnaq.

?We want candidates who represent our community,? Mr. Mekhitarian said. ?We are not with the opposition, and not with the majority.?

That dynamic is common enough in Lebanon, a checkerboard of mutually suspicious sectarian groups that are usually more concerned with protecting their own interests than with advancing any broader national or regional agenda.

But even in Lebanon, the Armenians stand out for their independence. During the 1975-1990 civil war, the Armenians refused to take sides. Tashnaq discouraged its members from leaving the country (though many Armenians did leave), in deference to Lebanese patriotism. Officially, the party is socialist, but its only real credo is survival.

Mr. Haidostian said: ?I remember when I used to get stopped at a checkpoint, they would ask, ?Are you Christian or Muslim?? I would say ?Armenian,? and it was like a third category. They didn?t know what to do.?

Despite the risks, many Armenians say they find Lebanon a uniquely accommodating place, largely because its weak state allows them to live almost as a separate nation. ?There is something tentative about Lebanese identity, and in that questioning Armenians have found a comfortable space,? Mr. Haidostian said.

Although there have been Armenians here for centuries, they first came in large numbers after the genocide. Later wars and crises led to more migration, increasing the size of the Lebanese Armenian community to 240,000 by the 1970s. The creation of the independent state of Armenia in 1918 had provided refuge to some, but its small size and role as a Soviet client state after 1920 set limits on its role as an Armenian homeland. 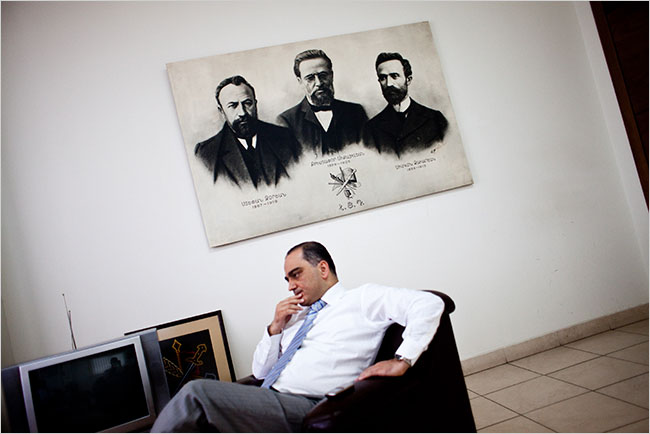 In Lebanon, the Armenians had an unusual mix of freedom and insecurity, allowing them to practice their religion and culture, but also limiting their assimilation into the general culture. In the United States, Armenians often marry outside their group and are less likely to speak their own language; here, they remain far more distinct.

The Beirut neighborhood of Bourj Hamoud is a kind of miniature Armenia, with shop signs written in Armenian script and a dense, familial culture of working-class shops, homes and restaurants. The Lebanese branch of Tashnaq is based there, flying the party?s distinctive banner bearing a pen, a shovel and a dagger ? representing ideology, work and struggle. There is also a rich network of schools, orphanages, retirement homes and hospitals. Schoolchildren learn three languages (and three different alphabets), and start on a fourth language in the fourth grade.

Maintaining this independence requires political skill. During the civil war, Bourj Hamoud was trapped geographically between Christian and Palestinian areas, and its leaders had to work hard to avoid becoming a target for either side.

Recently, that neutrality has been difficult to preserve. Tashnaq has long been a de facto Syrian ally, partly because of Syria?s former military domination of Lebanon. After the Syrian withdrawal in 2005, it remained in the Syrian political camp, mainly because it blamed the other side for an electoral law that divided Armenian districts and reduced its power.

This spring, Saad Hariri, the leader of the pro-American parliamentary majority, tried to mend fences with Tashnaq, which controls the vast majority of Armenian votes. He had good reason: last year the electoral law was revised in a way that restored the Armenians? power.

Lebanese Christians represent the swing vote in this election, and the 160,000-strong Armenian community is by far the most unified subgroup of those votes. If Mr. Hariri could have persuaded Tashnaq to vote with him, the balance might have tipped in his favor to defeat Hezbollah and its allies.

Members of Mr. Hariri?s party who took part in the negotiations offered a slightly different account. They said Mr. Hariri offered to satisfy Tashnaq?s demands on parliamentary seats, but only if the party would commit firmly to supporting him before and after the elections. It would not do so, they said.

That is not surprising. In a sense, the Armenians cannot afford to make such political commitments. Like the Druse and other minorities in Lebanon, they believe they must subordinate all ideological principles to a nimble defense of their community.

?In politics, you can?t always be neutral,? said Hagop Pakradounian, a Tashnaq member of Parliament. ?But we try to maintain links to all sides.?

1) Supporters watched a speech by Hagop Pakradounian, a politician from the main party of the Armenians, Tashnaq, on May 9 in Beirut, Lebanon.

2) Hagop Havatian, a Tashnaq official, under a portrait of the party?s founders. The party operates in 35 nations.

The dilemma of the Lebanese Armenians

Outcome of Metn polls may hinge on Armenians

Newer PostArmenia to support UAE's candidature for IRENA headquarters
Older PostBe the first… Be a No.1… Be UNO