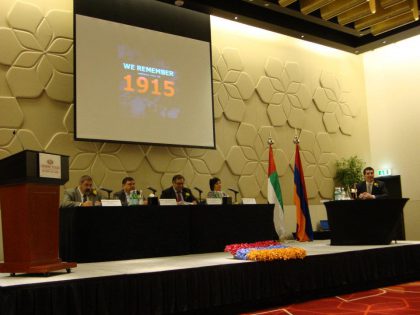 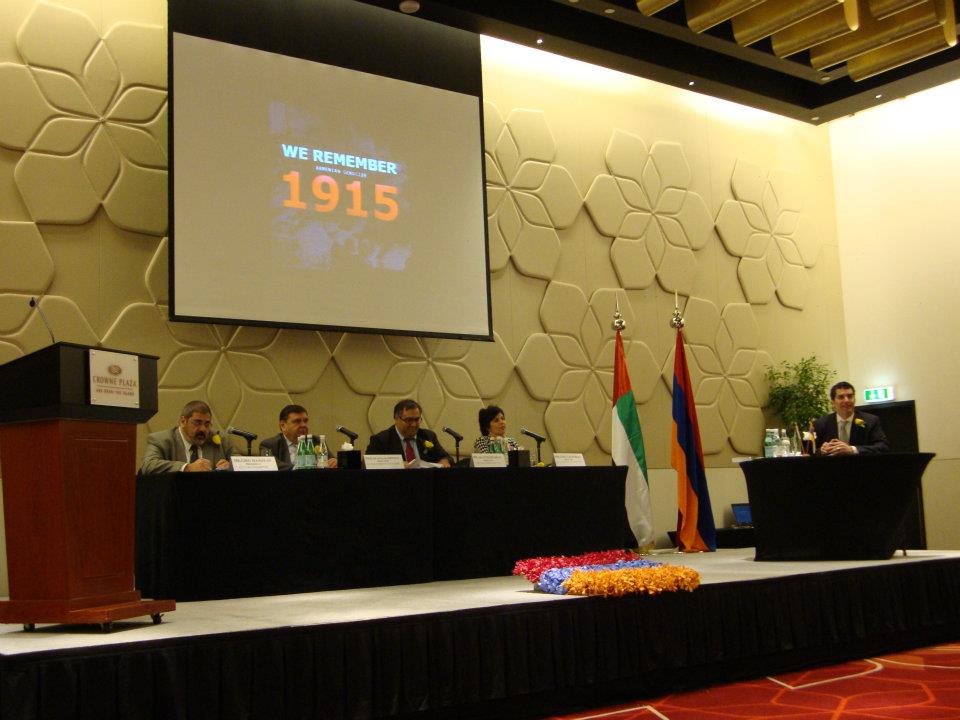 On the occasion of the 97th anniversary of the Armenian Genocide, a delegation of representatives of “Hay Tad” (Armenian Cause) offices worldwide had a round table discussion on 28 April 2012 in Crowne Plaza hotel, Yas Island, Abu Dhabi, UAE.

The delegation was headed by Giro Manoyan, President of “Hay Tad” worldwide offices, who attended the discussions with Aram Hamparian, Kaspar Garabedian and Vera Yacoubian, the heads of USA, Europe and Middle East chapters respectively.

The event was attended also by His Excellency Gegham Gharibjanyan, Ambassador of Armenia in the UAE, Reverend Father Aram Deyermendjian, Parish priest of UAE Armenians, large number of members of the Armenian community in UAE, representatives of several organizations and distinguished guests.

At the beginning, Giro Manoyan gave a brief presentation on the activities of the Hay Tad offices and their goals. It is known that there are dozens of such offices operating worldwide. They do not only work for the recognition of the Armenian Genocide but also are involved with other issues such as the problems facing Armenians in Javakhk.

Referring to the activities of the USA chapter, Aram Hamparian mentioned that there are many Armenian Americans who have strong capabilities, but they lack the interest and enthusiasm in dealing with Armenian issues.

Is it enough to educate the youth and teach them how to preserve their language and religion?

Manoyan agreed that whatever we do in the Diaspora, the coming generations will face even more critical assimilation, but the issue is to know how to act in such circumstances. For example, it is possible to find someone who is “assimilated” as far as the knowledge of language and traditions are involved, but he/she can provide assistance and support to the Armenian cause. In any case it is very important to maintain the Armenian schools in Diaspora, he stated.

Contrary to what some people might think, Genocide is not what unites us, rather it is the existence of the state of Armenia is our unifying factor, Manoyan underlined, calling to undertake efforts for increasing the number of Armenian citizens with an additional 1.5 million people until 2015. Wherever we live we feel that Armenia is our homeland, he added.

Answering to the question whether the signing of the Armenian ? Turkish protocols in 2009 creates obstacles in the activities of the Hay Tad offices, Manoyan answered: “Homeland and government are two issues separate from each other. Even if the government is following a wrong policy, citizens must not leave the country. Regarding the protocols, since Turkey has not approved the protocols until this moment, Armenia should withdraw them”.

Hamparian stressed that we should fight for the recognition of the Genocide as a crime. The definition should be as Genocide (the crime of Genocide). The problem is that official Yerevan has been labeling the crime as conflict.

According to Kaspar Garabedian, after the signing of the protocols the campaign for the recognition of the Armenian Genocide has faced difficulties, because the perpetrator and the victim have been placed on the same level. In Europe we will continue the work for adopting resolution in France criminalizing the negation of the Genocide, he stressed. Another important issue on our agenda is the situation in the Armenian populated region in the south of Georgia known as Javakhk. There is a community of about 200 thousand Armenians living there, but their numbers are decreasing due to the immigration. The region is one of the poorest in Georgia and has serious economic and unemployment issues. The Armenian population does not speak Georgian well and this has been reason for discrimination against them. Javakhk has importance for Armenia's security as it is an area not populated with Azeris and Kurds (contrary to other nearby areas inside Georgia). There are plans to build a highway from Armenia to the Black Sea in Georgia through Javakhk, thus creating a link with the sea and a window on the north of Armenia far from areas in Georgia where Azeris live and occasionally try to harm Armenia.

Regarding the Middle East issues Mrs. Vera Yacoubian underlined that since the opening of the Middle East office in Beirut in 2005 this has been her third visit to the UAE with a prospect of more active process ahead. She pointed out that the major obstacle in pursuing Hay Tad goals in the region has been the lack of democracy and political freedom in the Arab World (with the exception of Lebanon). The other element is the religious factor which is exploited by Turkey to penetrate the Middle East, especially now that Turkey is less associated with Europe. In the Middle East assimilation might be something that is not taking place as heavily as in other countries, but the number of Armenians is shrinking through immigration.

The Middle East office has become a great source of information for Arab journalists and scholars who research on Armenian issues. Many contact the office for clarifications and explanations. Some of the highlights include a visit to the Arab League headquarters in Cairo and to Al Jazeera channel in Doha, during which Armenian positions were explained. Hay Tad office in Beirut has facilitated the visit and filming of documentary on Armenia and Artsakh by Al Jazeera crew.

A cause for great concern is seen the immigration of Armenians out of Middle East countries, Yacoubian said.

Concluding the discussion the representatives of Hay Tad offices unanimously agreed that there is a lot of work to do. The Armenian Cause can be assisted by various countries and individuals but eventually the burden falls on the Armenians themselves.

Below photo: Vera Yacoubian on the left (Middle East chapter) and Armine Avetisyan. 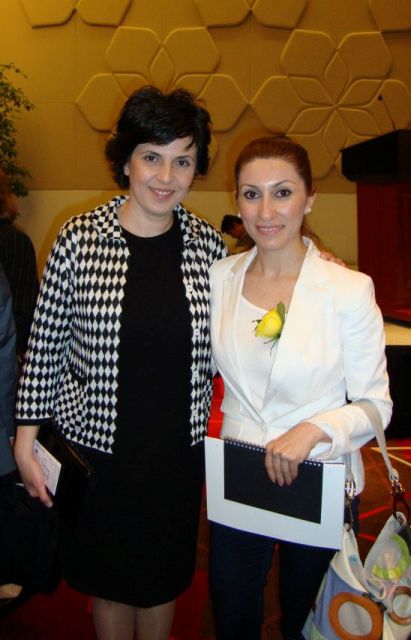