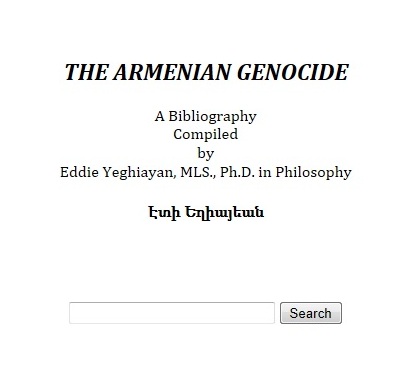 An extensive documentation of history

A newly published bibliography covering literary publications on the Armenian Genocide will now serve as a key to the multitude of works written on this important chapter in  history.

Bibliographer Eddie Yeghiayan, Ph.D., has gathered a vast and extensive library of material on the Armenian Genocide, providing copious notes and details on the major works that have dealt with the destruction of the Armenians during World War I. In the “Armenian Genocide Bibliography,” Yeghiayan has arranged a library of information to help us gain a better grasp of the thousands of publications covering the genocide.

Of course, any bibliography that aspires to furnish an exhaustive collection of literature on so broad a topic as the Armenian Genocide will always fall just short of completeness. The voluminous documentation that exists on the systematic extermination of the Armenians during the First World War ranges from contemporary articles published in newspapers and journals worldwide, in the reports, correspondence, diaries, and memoirs of military men and statesmen, the eyewitness testimony of survivors, missionaries, relief officials, and officials in the diplomatic corps, to material from the archives of the United States, Europe, and the Near East, to say nothing about the numerous studies published in the realm of academia.

Looking past the problems inherent in so daunting an enterprise, it is nonetheless surprising that no dedicated bibliography on the Armenian Genocide has appeared since Richard G. Hovannisian?s The Armenian Holocaust: A Bibliography Relating to the Deportations, Massacres, and Dispersion of the Armenian People, 1915-1923 in 1980.

It was in order to fill this gap, to provide to the scholar and the layman alike a clear and accessible work of reference that Dr. Eddie Yeghiayan of the University of California, Irvine undertook the painstaking process of compiling a comprehensive bibliography on the Armenian Genocide.
The descendant of survivors of the massacres and deportations, Yeghiayan has not only drawn from scholarly books, articles, and print media, but has also produced lists of works published in the fields of the arts and literature, as well as in the medium of television, documentaries, and the Internet.

At over a thousand pages long and the product of five years' of research, he has collated a vast and diverse array of material and presented it to the reader in a cogent and gracefully organized format.

The Armenian Genocide Bibliography will prove to be the definitive work for reference and consultation for a new generation of scholars and individuals keen on learning about the first major humanitarian crisis of the twentieth century.

The Center for Armenian Remembrance is proud to bring the first of its kind digital archive of this vast collection of publications. The bibliography is available to the public and fully searchable at http://www.centerar.org/bibliography/. Visit this link, search and explore our vast archive today.