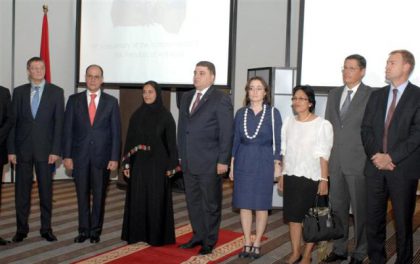 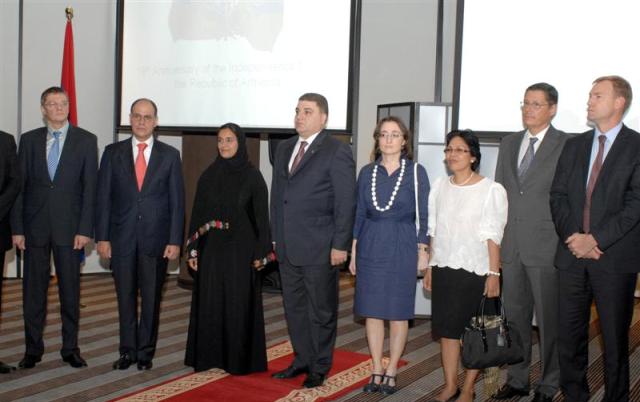 Once again the Armenian Independence Day celebration took place in Abu Dhabi, United Arab Emirates. This year the venue was the newly opened Holiday Inn Hotel, which proved to be a nice change and a discovery of a new and cozy location.

Members of the Armenian community from all around UAE gathered to exchange news, discuss the current political topics and most importantly celebrate the 19th Anniversary of Independence with a nice glass of Armenian brandy brought especially from Armenia.

The celebration was also supported by many representatives from local companies of different fields and industries, diplomats and simply people who love Armenia.   The guest of honor was Sheikha Lubna bint Khaled Al Qasimi, Minister of Foreign Trade of the United Arab Emirates who was very happy to be present at the celebration and is already known for being a great supporter of Armenia.

Ambassador Vahagn Melikian, after greeting Sheikha Lubna personally, had a very impressive speech on how the bilateral relations between the two countries have been developing for the past years.   Ambassador Melikian mentioned that although Armenian Emirati relations are only ten years old, many positive changes have taken recorded during that period. “Over thirty document-signings of major importance have taken place, along with plenty of high and mid-level mutual visits. Special attention has been paid to agriculture, information technology, jewelry, tourism and alternative energy solutions” said the Ambassador. It was also mentioned that Armenia-UAE relations can serve as a role model for other countries.
The Ambassador concluded his speech confirming that Armenia will remain a reliable partner in any field, and the region itself. Hence, our goal should be to make this planet a safer place to live for the next generations.

The evening continued in a nice atmosphere, supported with a background of traditional Armenian music and a slideshow of historical places in Armenia, which grabbed the attention of the guests.