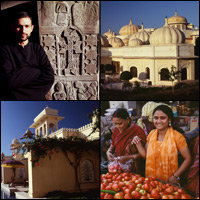 Every year in the month of September India celebrates ?Hindi Day? to commemorate the Language which is spoken and/or understood by over one billion people not only in India but in many other parts of the world. Hindi is the Official and National Language of India. It derives its origin from Sanskrit which in turn belongs to the Indo-European Family of Languages to which Armenian also belongs. There are at least few hundred words which are common between Hindi and Armenian testifying to old tradition of interaction between the peoples of the two countries.

Recognizing the growing interest in learning Hindi amongst Armenians, the Indian Council of Cultural Relations of the Government of India decided to establish a Hindi Chair at the Yerevan State Linguistic University after Brusov (YSLU). The Chair became operational with the arrival of Mrs. Anita Verma in February 2010. Within the last six months, the number of students enrolled for learning Hindi has increased from 15 to 35.

On the occasion of ?Hindi Day ? 2010?, the Hindi students of YSLU organized a colourful cultural programme. There were music and dance performances, and also Poetry, Speech and Drawing with Hindi slogans competitions. The winners were suitably awarded.

On this occasion, the Government of India also announced one scholarship for a deserving candidate to study Hindi at the Yerevan Institute of Humanities (YIH). The Rector of the Institute, Mr. Michael Amirkhanyan, has graciously agreed to sponsor one candidate for learning Hindi on his part. Accordingly, two young Armenian girls have now joined the Institute and started learning Hindi on the basis of full scholarship. This scholarship is in addition to the scholarships which are being awarded from time to time for Armenian students to learn Hindi at the Central Institute of Hindi (Kendriya Hindi Sansthan) in India.

On this Hindi Day, the Government of India has also decided to equip Hindi Room at Galik College, Ijevan with appropriate furniture including Blackboard, Almirahs, Teacher?s Table and ten Students? Desks with Chairs. Galik College, Ijevan is teaching Hindi language to young Armenians for the last few years in Tavoush Region.

On this occasion, the Ambassador of India and the Rector of YSLU jointly released a ?Special Supplement of Namaste India? which contains famous love stories from Indian folklore. These stories have been rendered into Armenian language by Ms. Gayane Aghamalyan who has been translating works of Indian literature from Hindi into Armenian for the past some time.

Press Release by Embassy of India in Yerevan, Armenia.