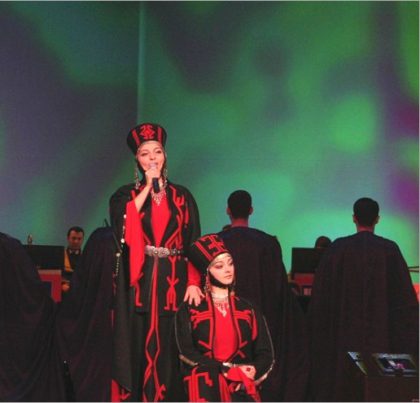 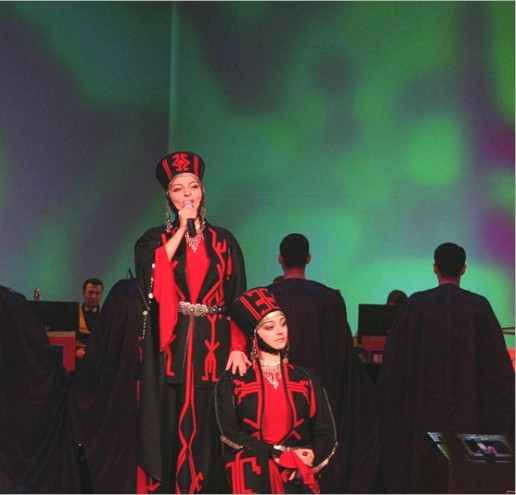 December the 15th 2006 was a very important day for some Armenian stars and a delicate date for some others. There were both victories and disappointments too.

It was the 4th Armenian National Music Awards held in the National Academic Theatre of Opera and Ballet (named after Alexander Spentiarian). The ceremony was attended by the ?s President Robert Kocharian.

This year the people didn?t participate in the voting process for their favorite artist, song or group. There were no sealed envelopes prior the show and a new way of voting was adopted. A jury of 15 people was sitting in the front row watching the show; head of the jury was Arthur Krikorian (president of State Song Theater). After presenting each category and nominations, the jury had to vote with special remotes in their hands and the results were shown on a big screen, thus the most voted nominee was considered a winner.

With my respect of every member in the jury, it was not fair, because I don?t know how much the nominations were studied well by the jury before the show or they were just voting after hearing or watching them during these few seconds of presentation. Nobody knew what was going on…

The absence of some big names was obvious. There were only two candidates in both best male and female singer categories. Names like Shushan Bedrossian, Andre, Sirusho, Leyla Saripegian, Hamlet Kevorkian, Christine Pepelian and others were not among the nominees. The latest two did not even participate in the show. Pepelian made an announcement after few days saying:

“At the last moment before the Music awards the organizers told me that 'The national Music Awards is not for the singers like Armenchik and we don't actually desire Armenchik to be present at this event, even if he comes by his expenses'. I consider Armenchik to be one of the real Armenian stars. He is not only one of my best friends he is also a very patriot man and I express my solidarity to him for possessing so much positive qualities. I refused to take part in any of the categories and watched the event on TV like many others. After that I understood that it wasn't worth to take part.”

One of the winners declared that this was the last year she was participating and she won?t go through this false contest next year.

So who decided who to take part in this event? Again nobody knew…

Some categories were cancelled this year, even others didn't exist at all like popular vocal and classical music categories. Why?

There were performances by Sirusho, Empyray, Hasmig Garabedian, Dikran Bedrossian, Andre, Anush & Inga Arshagian, Armine Nahabedian, Arman Hovhannissian, Hayer, Emmy, Hayko and others. The last one was by Shushan Bedrossian with her hit “Miayn Ser” (Only Love) to keep both love and peace spirits among the nominees.

Last year the show was better organized compared to this year, performances were sounding live and there were several music bands changing during the?four hours event, even the accompanied show groups were more creative.

2006 award prizes were as follows:

6- Best album of the year Dikran Bedrossian (To whom).

10- Armine Nahabedian and Arman Hovhannisian got the best duet award for their song “Ays Kisher” (This night).

11- Vartuhi Vartanian was awarded a special prize for contribution to Armenian musical art.

12- Andre got a special award for his participation in the Eurovision song contest 2006.

13- Special award was given to “Charles Aznavour and friends” project.

See “Kami pchi” hit of the year (no. 8 award) online video on Google.

7- Hasmig Garabedian getting her award

Coming up next: interviews with one of the best female singers of 2006 Hasmig Garabedian, and the winner of best album of the year Dikran Bedrossian.