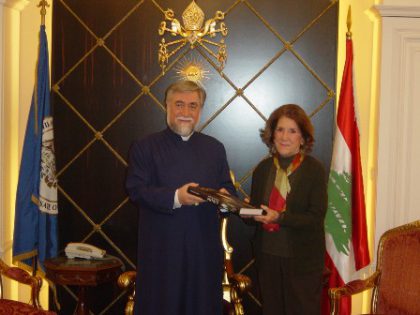 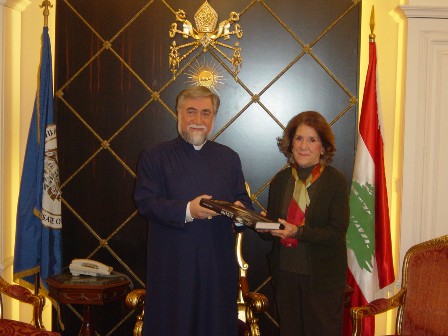 Nina Jidejian offered the first copy of her recently published book “Sidon Through the Ages” to His Holiness Aram I during a personal visit to his office in Antelias on 22 December 2006.

The 400-page English language publication is a historical study of the southern Lebanese city . It is rich with documentary inscriptions and photographs about this historical city.

A renowned archeologist, Jidejian is well known for her valuable publications on various Lebanese cities. The widow of Dr. Yervant Jidejian, the author has dedicated herself to archeological studies that have been published and widely applauded both in local and international media.

This book, published in , documents the history of a city deeply rooted in the life of ancient people. Its study can contribute to the development of human civilization.

Source: adapted from the press release of the Catholicosate of Cilicia (www.cathcil.org)

: What is a historian to do after writing 15 exhaustively researched books of comprehensive scope on every major archaeological site in a country as small as ? If that historian is Nina Jidejian, the answer is revisit, revise and update.

On Wednesday, Jidejian gave a lecture at the of 's archaeology museum on the Phoenician necropolises of . It was a suitably studious – and modestly deflecting – manner in which to celebrate the publication of “ through the Ages,” a revamped and enlarged edition of a book Jidejian fist published back in 1972.

The new edition incorporates recent discoveries, such as those made by the 's archaeological mission, which began studying in 1998. Also new is the story of a particularly top-heavy camel in the time of Lady Hester Stanhope that trod across Wadi Abu Ghyas and fortuitously collapsed through the concealed roof of a 2,000-year-old tomb replete with fully preserved wall frescoes.

Jidejian was born in , raised in and ended up in thanks to a visit she paid her sister, who suffered a minor accident in the Lebanese capital and had to convalesce in the hospital. While visiting, Jidejian fell for her future husband.

Though she had completed two years of university in , she didn't return to school until after she married and had a child. Her AUB thesis on became her first book. 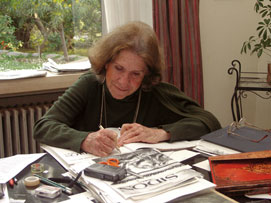 While “ through the Ages” draws on source materials and artifacts from all over the world, the book, and by extension Jidejian's entire enterprise, maintains fierce loyalty to that regal underdog of 's cultural life – the .

“ through the Ages” revels in the fact that the in holds the largest collection of marble anthropoid sarcophagi of any institution in the world. These sarcophagi incorporate Egyptian mummy cases and elements of Greek sculpture. They are considered distinctly fifth-century Phoenician inventions and mark an early attempt at portraiture in . If nothing else, Jidejian's latest book, the first of many revisions she plans to do, is good motivation to get oneself to the museum once and for all. – The Daily Star

Nina Jidejian's “ through the Ages” is out now from Aleph

Read also the profile of Nina Jidejian as printed in the Spring 2006 issue (Vol. IV, No. 3) of MainGate (quarterly magazine of the of ).