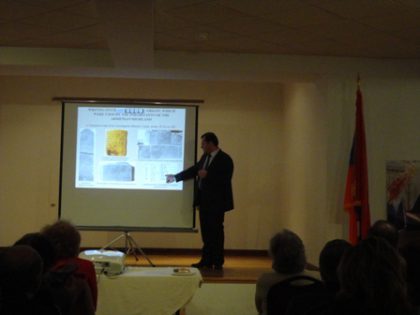 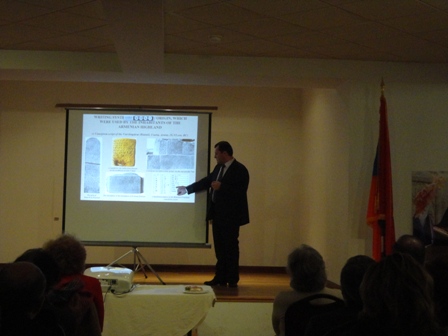 On Sunday, February the second at the Pashalian Hall of  St. Illuminator's Cathedral in Manhattan, the audience learned much from the lecture / multimedia presentation given by Dr. Artak Movsisyan, professor at the Yerevan State University and organized by the New York and New Jersey chapters of Hamazkayin Armenian Educational and Cultural Society. This event was a part of the Hamazkayin Eastern USA Distinguished Lecture series, celebrating the 500th anniversary of Armenian printing. Prior to New York, Dr. A. Movsisyan had given a lecture in Boston, and will continue his lecture tour in major cultural centers of the West Coast.

On Sunday afternoon in attendance were Mrs. Hasmig Aprahamian and Mr. Hagop Melkonian, representatives of the Eastern United States Regional Executive Committee of the Hamazkayin Armenian Educational and Cultural Society.

Mrs. Hasmig Aprahamian made the opening remarks and invited Dr. Ara Caprielian, chairman of the New York chapter, who was the master of ceremonies of this event. Dr. Caprielian presented a brief introduction to Dr. Artak Movsisyan's vast body of research publications in Armenian, Russian and English languages.

Dr. Movsisyan's lecture was brimming with facts from primary sources of Armenian and non-Armenian origin, proving that in the pre-Mashdots or pre-Christian era Armenians had a well-developed writing, spanning several millennia.

After a lively question and answer period, Rev. Fr. Mesrob Lakissian,  pastor of  St. Illuminator's Cathedral, expressed his thoughts upon the lecture and once again congratulated Hamazkayin on organizing diverse and interesting programs.

Following his closing remarks, Dr. Caprielian commented that to guarantee Armenia's security and viability a disciplined and motivated army is necessary, but scholars of  our national history as Dr. Artak Movsisyan are also vitally important for teaching and presenting our true history to counteract the revisionists and pseudo-historians attempting to distort factual history. He also thanked Rev. Fr. Mesrob Lakissian and the Board of Trustees for welcoming and hosting several of Hamazkayin's programs at the Pashalian Hall. Fr. Lakissian consistently encourages Hamazkayin's cultural activities and proves by his deeds his strong belief that the Cathedral ought to be a lively center for the community at large.

It was extraordinarily rewarding to see how Dr. Movsisyan's books were flying off the table. The titles offered: “The Sacred Highlands: Armenia in the Spiritual Geography of the Ancient Near East,” “The Writing Culture of Pre-Christian Armenia” and “10 Outstanding Armenian Kings” were no “light fare,” yet most of the books were purchased within minutes. The attendees surrounded the lecturer, asking additional questions, and  patiently waiting to get their books inscribed. It was encouraging to hear that most of them were looking forward to future programs offered by Hamazkayin of New York. 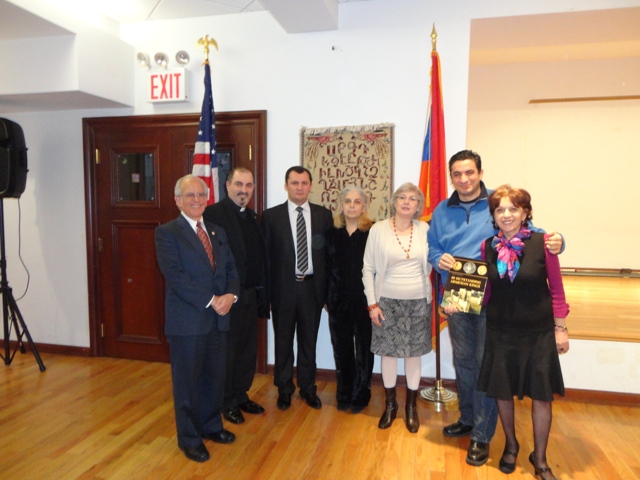