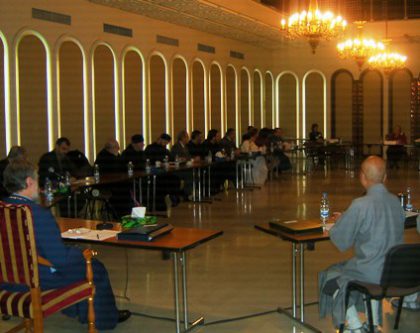 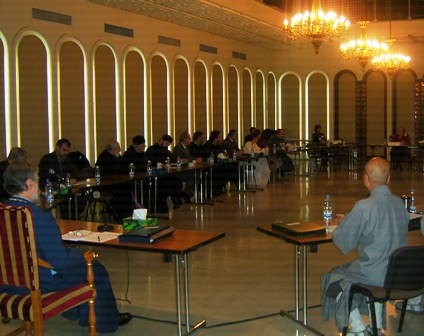 The Asia-Middle East interreligious dialogue inaugurated on Sunday 12 November 2006, continued its work in the Armenian Catholicsate of Cilicia with the leadership of His Holiness Catholicos I.

Building peace based on love, search for truth and justice is the vocation of all religions said the speakers. At the end of the session the participants visited at Dar-al-Fatwa Sheikh Muhammed Kabbani the Mufti of the . After leaving the Mufti the delegation visited the ruins of the Israeli invasion in July 2006 in the southern suburbs of .

Sacredness of life, a gift and a call to spirituality was the topic of the afternoon session. Dr. Hisham Nashabe(Sunni) moderated the session and the Venerable Guo Yuan (Buddhist Taiwan) and Mr. Camil Menassa (Christian, ) reflected on the theme. Speakers emphasized the centrality of protecting all life in their religions.

Following the panels the participants met in two groups to discuss the presentations of the past two days.

One of the important aspects of the agenda of this meeting is the visits to religious leaders in their own communities. On Sunday the members of the dialogue had visited the Maronite Patriarch Cardinal Sfeir. In both visits the participants appreciated the openness and sincerity of the religious leaders. The meeting will be concluded on Tuesday 14 November in the afternoon.

, – The participants of the inter-religious conference, organized in Antelias by the Catholicosate of Cilicia, thanked His Holiness Aram I for organizing the initiative and called on him to continue the process of inter-religious dialogue and cooperation among all the religions of the Middle East and .

The final part of the conference included a special session, which focused on the essential role of moral values in the life of societies. His Holiness Souami Parmeshananda (a Hindu delegate from ) and Father Fadi Daou (a Christian delegate from ) presented speeches on this topic. Rev. Haroutioun Selimian from chaired the session.

The participants broke up into small groups and discussed the importance of moral values and their place in people?s lives. In the plenary session, which followed, they presented their conclusions to the rest of the participants. In these presentations, members of the groups analyzed the various issues taken up by the conference and delineated the similarities and differences in the approaches to these issues taken by the different religions.

The conference was officially concluded with a special session on the evening of November 14. Dr. Joan Campbell, Former General Secretary of the United States Council of Churches, chaired the event.

The closing session provided a platform for the participants to evaluate the various aspects and achievements of the conference. The delegates all agreed on the importance of such an initiative for Asia and the . The representatives of the Buddhist and Hindu religions, in particular; expressed gratitude for this first-ever opportunity to interact with Christian and Muslim spiritual leaders from the . Expressing their gratitude to His Holiness Aram I, they asked him to pursue the process he initiated.

The conference report was then read and adopted.

His Holiness Aram I delivered the concluding remarks of the conference, during which he emphasized the following issues:

He thanked all the participants for accepting the invitation of the Catholicosate of Cilicia and coming to Antelias. In this respect, he particularly praised the efforts of Dina Myriam from the and Teni Simonian from for organizing the conference.

Secondly, His Holiness stressed that humanity today faces various difficulties in a world that has grown smaller over time. He pointed out that it is essential for religions to cooperate as much as possible, and concluded that the differences between religions should be respected and should not lead to polarization and isolation. Religions should approach each other for cooperation and look together for common grounds.

Thirdly, His Holiness stated that religions should seek to become a moral force and an authority in today?s societies, by practicing moral values and working to spread them.

A delegation of the participants had the opportunity to meet the spiritual leader of the Shiite Community in , Sheikh Abdel Amir Kabalan.

All the participants visited the Birds? Nest in , where they had lunch.

A number of spiritual leaders from both regions sent letters to the conference. These included addresses by His Holiness Matta Amirtanandamayi, head of an important Hindu organization, Ayatollah Taskiri, head of the inter-religious department of the Republic of Iran and Prince Hasan Bin Talal, head of the Christian-Muslim dialogue committee of Jordan.