The Embassy of the Republic of Armenia in Abu Dhabi expresses its deep condolences and support to the families and relatives of the victims of the Caspian Airlines plane, which crashed on its way to Yerevan on 15 July 2009, killing more than fourty compatriots.

The Embassy wishes to the families patience and spiritual strength in the face of this unexpected tragedy. 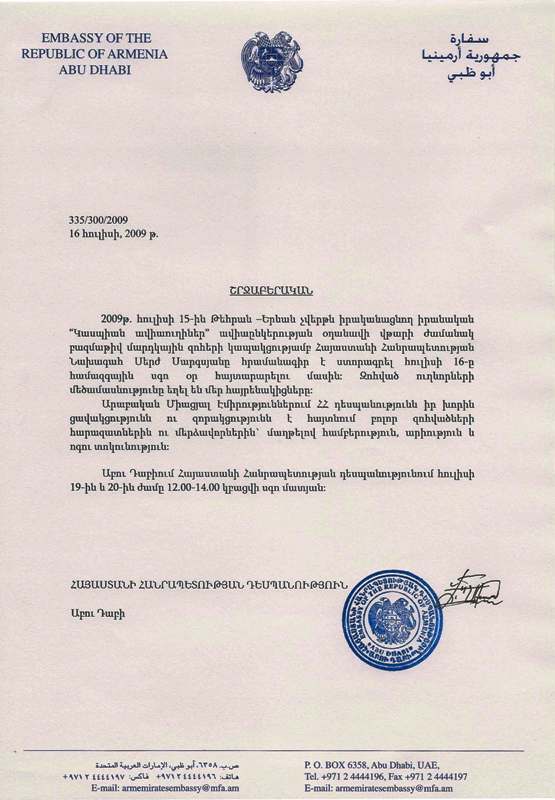 WAM, Abu Dhabi, 15th July 2009 — President H.H. Sheikh Khalifa bin Zayed Al Nahyan has sent cables of condolences to Presidents Mahmoud Ahmadinejad of Iran and Serzh Sargsyan of Armenia on the victims of a plane crash in west of Iran.

The president expressed heart-felt condolences to families of the victims and prayed The Almighty to grant them patience and solace.


ANTELIAS, Lebanon ? Upon hearing the tragic news of the crash of Caspian Airways on its flight from Tehran to Erevan, His Holiness Aram I immediately contacted the Prelates of the Dioceses of Tehran, Isfahan and Tabris, asking them to convey his prayers and condolences to the families of the victims. He then sent letters to the President of Armenia, H.E. Serge Sarkissian, and the President of Iran, H.E. Mahmoud Ahmadinejad.

On 16 July 2009, His Holiness Aram I presided over a requiem service in memory of the victims of the crash, and sent a delegation to the Embassy of Iran in Beirut to convey his condolences to the Ambassador.