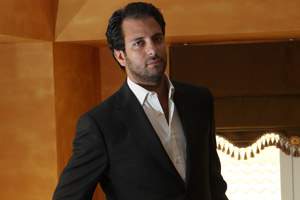 Guy Manoukian's new album, Assouman, has been number one on the music charts in Lebanon for the past two weeks.

The way Guy Manoukian sees it, he?s contributing to making the world a smaller place. The singer, composer and performer combines a distinctly Arab sound with catchy pop loops to create borderless house hits, as popular with Arabic music fans as they are with clubgoers in Asia.

?I arrange my melodies in a way that?s classical, so they?re rooted in the past, in the history of Arab people. But I do it in a way that people like in modern times,? he explains, adding that he has been performing sold-out shows from Singapore to Armenia and has upcoming events in Bali, Australia and Malaysia, among other places. ?Performing in those countries, when I go there I am bringing my home to their home. The world has really become a village. It?s a new world, with a new culture. And I want to be part of this.?

In Dubai to promote the release of his latest album, Assouman, the 33-year-old Lebanese performer is ebullient, discussing the fact that life has never been better. The new album has already gone gold in the Middle East, sitting at number one on the charts in Lebanon for the past two weeks.

?The people were waiting; they haven?t seen an album from me in a while. I was taking my time,? he says. ?The waiting and the hype built up the interest, which is why it hit the charts at number one in Lebanon.?

Before Assouman, Manoukian had released one studio album and another of live recordings. In the years since the last album, he worked with the Haitian-American hip-hop artist Wyclef Jean as well as the American rapper 50 Cent and the French rapper Diams. Collaborating with Jean marked a turning point in the way Manoukian produces his music.

?It was like going to university, I learnt so much. And my whole standard of production changed,? he says. ?My production became more professional. Now I?m working in the best studios.?

The new album will be released in Europe under the title Vibes, but its Middle Eastern title, Assouman, is an Iranian word that means ?clear skies?, something Manoukian feels reflects the mood and mentality of Arab youth.

?Arab youth are open-minded people, and this album is a real meeting of East and West. It?s international, it?s Arab and it?s modern. It?s like Dubai,? he says. ?I call it ethnic house. And I actually created it in 2001, it?s a new sound.?

Modesty may not be part of Manoukian?s public persona, but his energy and passion for what he does make him likeable regardless. Some people think you have to go out to the mountains to be inspired, he explains, laughing, adding that even the most mundane experience ? a traffic jam, for example ? can inspire him to create the stories he tells through his music. The full range of emotions in the human experience is what inspires him, he says. And the climax of the creative process is the performance.

?It?s the best feeling, to perform. I?m comfortable on stage. It makes me really feel alive. The energy I get from the people is fantastic.?

It?s not surprising, considering Manoukian has been performing since he was 16. He began his musical career at the age of four and has been composing since he was eight. As a child, Manoukian studied and wrote classical music. Though it?s a markedly different genre from the dance music he?s making now, he maintains it was less a transition than a natural evolution and a conscious decision; he could have gone either way.

?I grew up in the Eighties. I love pop music. It?s melodic, it?s fun. I do what makes me happy.?

Luckily for him, what he does makes other people happy as well. He is original, he says, and so is his music. Unlike some of the artists working in the same genre, Manoukian explains that he is not a DJ, he is a composer.

?I don?t do remixes. Everything I do is original. I compose my own music, that?s the difference.?

Manoukian?s downtime activities are also somewhat out of the ordinary. His family owns a construction company, in his spare time, he enjoys walking around the sites.

While he can?t deny the exciting trajectory of his music career, what changed Manoukian?s life most significantly was the recent birth of his son, Gio, who, he says, is ?50 days old?.

Guy Manoukian's “From Darkeness to Light” track dedicated to the 1700th anniversary of the proclamation of Christianity as state religion in Armenia. Perfomed by the Shnorhali Choir of the Catholicosate of Cilicia. Conducted by Rev. Father Meghrik Parikian. About 18 minutes. Click Play below.