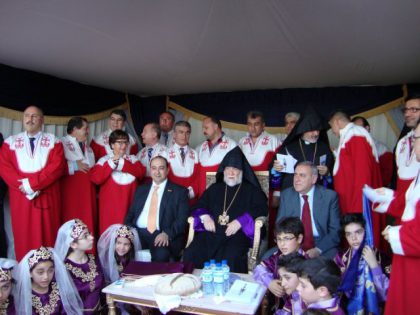 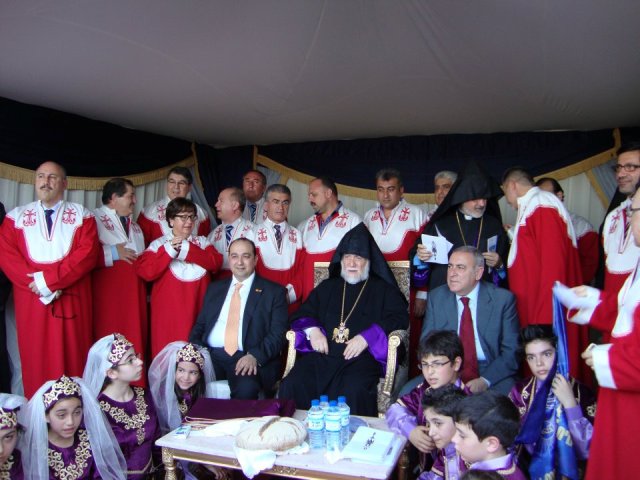 On Friday 4 May 2012, His Holiness Aram I presided over the Holy Liturgy at the Greek Orthodox Church in Abu Dhabi temporarily offered to the Armenian community. In his sermon he spoke of the three moments of the Holy Liturgy: remembering the Last Supper of Jesus, partricipating in the Holy Eucharist and witnessing for the faith by living the Gospel message and serviing the community.

At the end of the Liturgy, His Holiness greeted and blessed the faithful individually and then moved with his entourage to the location of the future Church. The Catholicos was accompanied by the Catholicosal Vicar of the Diocese of Kuwait and the United Arab Emirates Bishop Shahe Panossian, the Ambassador of Armenia to the Gulf Region, the Honorary Ambassador of Armenia to Der Zor, and the representatives of the Armenian communities in Abou Dhabi, Dubai and Qatar. The Scout's band of the pan-Armenian Sports Organization (HOMENETMEN) from Lebanon had also come for the occasion.

According to the tradition of the Armenian Orthodox Church, Catholicos Aram I blessed the 16 stones of the 16 columns of the church's foundation that were carried by 16 benefectors and witnesses. His Holiness named the Church The Holy Martyrs to comemorate the 100th anniversary of the Armeian Genocide. At the end of the ceremony, the Catholicos thanked the Emir of Abu Dhabi, the benefectors of the new church and the members of the community.

While in Abu Dhabi, His Holiness Aram I also met with the Executive Committee of the church, the board of the weekly school, the members of the women's association and the youth organization and thanked them for their commitment to the community. 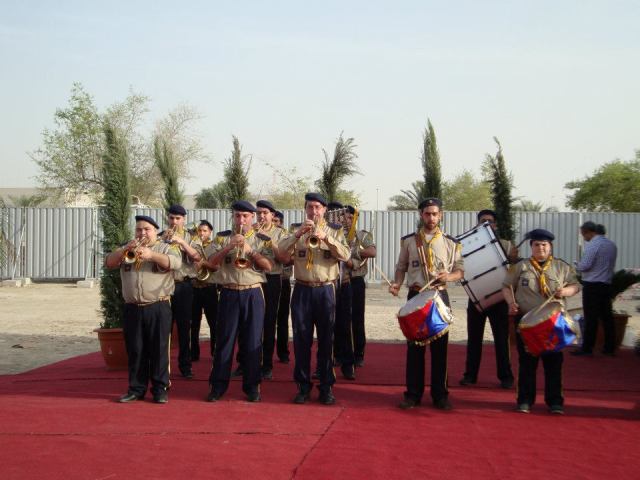 OTHER DETAILS FROM THE UAE VISIT

– On Tuesday 1 May 2012, His Holiness Aram I arrived at Dubai airport. He was met by the Catholicosal Vicar of the Diocese of Kuwait and the United Arab Emirates Bishop Shahe Panossian, the Lebanese Ambassador, the Ambassador of Armenia and his wife, members of the Executive Committee of the Catholicosate of Cilicia and representatives of Armenian organizations in the region.

– In the afternoon, the Catholicos held a meeting session with the members of the Executive Committee of the Catholicosate of Cilicia, and in the evening he attended a dinner organized in his honor.

– On Wednesday His Holiness Aram I presided over the Holy Liturgy at St. Gregory the Illuminator church in Shrajah, where he was greeted by students. His Holiness focused his message on the meaning of God in the personal and collective lives of the members of the Armenian Church. At the end of the liturgy, the faithful greeted the Catholicos and received his blessings.

– On Thursday Catholicos Aram I and his entourage left for Abu Dhabi.

– On Friday, 04 May 2012, Catholicos Aram lays the foundation stone of the Holy Martyrs Armenian Church (see report above).

– On Saturday, 5 May 2012, Catholicos Aram I visited the Embassy of Armenia for the United Arab Emirates. He was accompanied by the Catholicosal Vicar of the Diocese of Kuwait and the United Arab Emirates Bishop Shahe Panossian, and representatives of the Executive Committees of the community. During the reception organized in his honor, Ambassador Gegham Gharibjanian welcomed His Holiness and thanked him for his support and that of the Catholicosate of Cilicia to the Republic of Armenia. In his response, Catholicos Aram I spoke of the importance of cooperation and reciprocity between Armenia and Diaspora. His Holiness Aram I and his delegation also visited the Ambassador of Lebanon. After welcoming Catholicos Aram I, the Ambassador expressed his appreciation for the commitment of the Catholicos to Christian-Muslim dialogue both in Lebanon and abroad. During the official luncheon, His Holiness said: ''Armenians are full citizens of Lebanon and are committed to preserving its national unity and strengthening it economically. Because, after the Armenian Genocide they were well received by Lebanon and enabled to revive as a community and full members of Lebanese society.