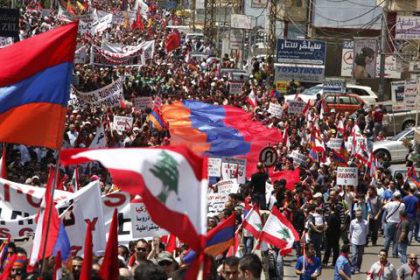 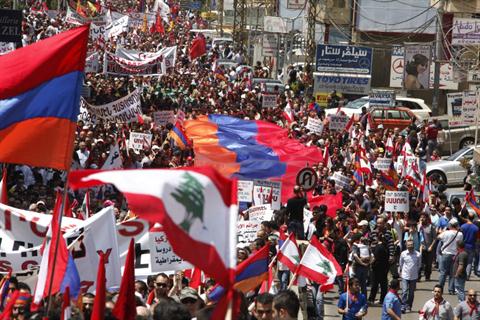 BEIRUT: Thousands of Armenian-Lebanese gathered outside the Turkish Embassy in Rabieh, Metn, burning Turkish flags and calling on Ankara to recognize the genocide of 1915-1916.

Officials at the Interior Ministry estimated that between 20,000 and 25,000 people took part in the rally, which began following a rememberance Mass at the Armenian Orthodox Catholicosate in Antelias, Metn, and proceeded to the Turkish Embassy in nearby Rabiyeh to mark the 97th anniversary of the genocide.

The huge protest prompted the Turkish Embassy to request a change of security arrangements in the vicinity of the mission.

Angry crowds were separated from the embassy by two rows of barbed wire fences and hundreds of riot police. No incidents occured during the two and a half hour rally which ended at 2:30 p.m.

They chanted anti-Turkish slogans and set at least six Turkish flags on fire.

Organizers managed to keep the situation under control and called for restraint.

Traffic from Antelias to Rabiyeh came to a standstill as a result of the protest, which saw the participation of the country's main Armenian-Lebanese political parties: the Tashnag, Henchag and Ramgavar.

Armenians say up to 1.5 million of their forebears were killed by the Ottoman Empire during World War I in what amounted to a genocide.

Turkey disputes the figure, arguing that up to 500,000 Armenians died during a war which claimed many victims, and that the Armenians were not the victims of genocide.

Meanwhile, the head of the Central Maronite Council, former Minister Wadih Khazen, issued a statement commemorating the Armenian victims of the genocide at the hands of the Ottoman Empire, comparing their suffering to that which Lebanon has endured in its historical quest for freedom.