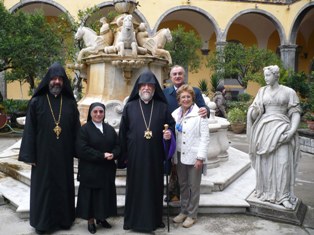 Cathlicos Aram I paid an official visit to the Italian catholic church named ?Saint Gregory the Armenian? in Naples on 22 October 2007. According to tradition, the skull of Saint Gregory the Illuminator is found in this church and hence the church and the street on which it is found are named after Saint Gregory. It is worth noting that on the occasion of the 1700th anniversary of the adoption of Christianity as an official religion by Armenia, Pope John Paul II dedicated remnants from Saint Gregory the Illuminator to the Catholicosate of All Armenians and remnants to the Catholicosate of Cilicia.
?
Catholicos Aram I said prayers in the church and afterwards, guided by members of the sisterhood of the church, took a tour to the various parts of the church and the monastery, which were full of artistic works depicting moments from the life of Saint Gregory, the torture he went through, and the Armenian nation?s conversion to Christianity.
?
A brief reception was organized afterwards, during which the Pontiff expressed his praise in the Monastery?s guest book. During his visit, the Catholicos was accompanied by V. Rev. Krikor Chiftjian (Communications Officer of the Catholicosate), and Mr. and Mrs. Alecco Bezikian (friends of the Catholicosate of Cilicia who live in Italy), as well as the representative of the Community of Saint Egidio.

ADDITIONAL READING
?
Catholicos Aram I holds important meetings in Naples
?
His Holiness Aram I held a number of important meetings on the sidelines of the ongoing conference (21-23 October 2007) on ?Faiths and Cultures in Dialogue.?
?
The Pontiff held a long meeting with Archbishop Rowan Williams of Canterbury, who had visited him in Antelias almost two weeks ago. The two Spiritual Leaders discussed ecumenical issues and particularly the possibilities for renewing the theological dialogue between the Anglican Church and the Oriental Orthodox Churches.
?


His Holiness also met with the President of the German Evangelical Churches, Bishop Huber, who is a long-time friend of the Catholicos. Bishop Huber once again thanked His Holiness for his lecture delivered to the conference held in Berlin. He invited the Armenian Pontiff to visit Germany.
?
Meetings were also held with the Ecumenical Patriarch of the Greek Orthodox Church, the general secretary of the World Council of Churches, the general secretary of the Lutheran churches, as well as a number of senior figures from other religions and prominent government officials.
?
The issues discussed during these meetings included ecumenical and inter-faith matters, the peace process in the Middle East, the decision taken by the U.S. House Foreign Affairs Committee with respect to the Armenian Genocide, the situation in Lebanon, and other issues.
?
Source: Press Release of the Catholicosate of Cilicia
Issue Number # 112/07???
Wednesday, October 24, 2007???????
Website: www.cathcil.org
?