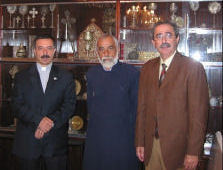 Nicosia, October 2007: Rev. Krikor Aghabaoghlou inspired the Armenian community in Cyprus and challenged them for one week to ?press on? with their struggle to preserve the Armenian and Christian identities. His real-life message filled with passion and compassion for Christ and Armenianness was very inspiring. He touched on ground realities by exposing the situation of the Armenian community in Istanbul and the remote cities and towns in Turkey. He portrayed not only the struggle for survival but also the struggle for truth and justice. His ministry and mission are undoubtedly exemplary.
Rev. Krikor Aghabaoghlou?s visit to Cyprus lasted from October 7 to 14, 2007. He delivered three lectures in the three main cities of Nicosia, Larnaca and Limassol. He was also the guest preacher on Saturday at the service of the Armenian Evangelical Church in Nicosia.

During his stay, Rev. Krikor Aghabaoghlou visited the Armenian Prelacy and met with His Eminence Archbishop Varoujan Hergelian, Primate of Cyprus. He then visited the Armenian member of Parliament in Cyprus, Mr. Vartkes Mahdessian, who had undertaken Krikor?s visa formalities to Cyprus.

Rev. Krikor got acquainted with the Armenian community in Cyprus by visiting the various institutions and organizations. He visited the Kalayjian Home for the old, met with the elderly in the center and encouraged them with the Word of God. It was, indeed, an emotional moment for the old Armenian residents of the center to see a person
coming from historical Armenia.

The Armenian radio program of the Cyprus Broadcasting Corporation interviewed Rev. Krikor for 45 minutes, and the interview was broadcast on Saturday, October 13. Rev. Aghabaoghlou also met with the editors of the three Armenian publications and e-news in Cyprus: Artzakank, Azad Tzayn and Gibrahayer.