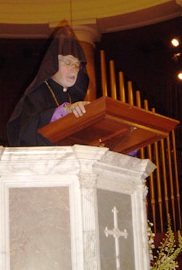 Archbishop Vicken Aykazian, Diocesan legate and ecumenical officer (Diocese of the Armenian Church of America / Eastern), was one of the key religious leaders to take part in “For the Peace of Jerusalem,” a conference organized by Churches for Middle East Peace, which ran in Washington, D.C. from May 6 to 8, 2007.

The session opened Sunday, 6 May 2007, with a concert and worship service at National City Christian Church.  Archbishop Aykazian, who also serves as president-elect of the National Council of Churches, was one of the featured speakers that evening.

Armenians have been a constant presence in Jerusalem since the 5th century, residing mostly in one-fourth of the Old City of Jerusalem known as the Armenian Quarter still today.  Though, in recent years the Armenian population of the Holy Land has dwindled.

“As Christians, our pilgrimage to Jerusalem is not only about a physical destination, but also about a spiritual journey.  That journey leads us to God, who is our refuge and fortress,” he said.

He noted that sadly violence has been too common in the region, not just during the present day conflict but for centuries.

“We should pray that peace based upon respect and trust becomes a reality in the hearts of all the inhabitants of the Holy City and all of Abraham's children,” he said.  “Unfortunately, time and circumstances do not favor the peacemakers.  Every day violence continues, pain and suffering grow. Violence must not be the means by which all sides seek to settle their differences.  It is only by respecting and guaranteeing basic human rights and dignity that peace can be established and maintained.”

In order to achieve peace, Jerusalem must not be viewed as belonging to man, but rather to God, he told those gathered for the service.

“For the sake of our future and our salvation, it must become the capital of all mankind and shared by all of Abraham's children.  Jerusalem is too precious to be left entirely to the whims of politics,” Archbishop Aykazian said.  “Jerusalem stands in time and space, as do we, but if this city is to reflect the purpose of its Maker, then it must be the city that He has defined — a city that is compact and unified, a city of justice, a city of feasts, a city secure.  God wants Jerusalem where He is, where He resides.
He wants Jerusalem outside of history and geography and possessed by none but Him.”

Other speakers during the service were Rev. Denis Madden, Auxiliary Bishop of Baltimore; and the Rev. Frank Griswold, former Presiding Bishop of the Episcopal Church.

The following day, participants attended a series of panels and workshops to prepare for meetings with members of Congress and their staffs.  On Tuesday, May 8, 150 participants from 26 states then took to Capitol Hill to lobby for governmental support of proposals to bring peace to the Middle East.

In their meetings, conference participants sought U.S. support for a two-state solution and a negotiated resolution for Jerusalem.

Churches for Middle East Peace (CMEP) is a coalition of 22 Orthodox, Protestant, Anglican and Catholic church bodies and organizations.  The organization began in 1984 and advocates for the avoidance and resolution of armed conflicts, human rights, arms control, foreign aid, and the unique nature of Jerusalem – sacred to Christians, Jews and Muslims.

Photo: Archbishop Vicken Aykazian, Diocesan legate and ecumenical officer, speaks on Sunday, May 6, 2007, during a service at National City Christian Church marking the start of a conference organized by Churches of Middle East Peace.

About 150 clergy and faithful attended “For the Peace of Jerusalem,” a conference organized by Churches for Middle East Peace, which ran in Washington, D.C. from May 6 to 8, 2007.