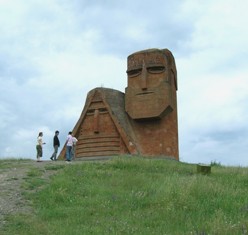 Ethnic tourism is the main segment of tourism in Karabakh. However, in the last two years other nationalities started visiting Karabakh, namely from Japan, Germany, Spain, and Russia, Sergey Shahverdyan, Director of Artsakh Development Agency, said in an interview with the www.KarabakhOpen.com
?
The number of tourists visiting the Republic of Nagorno-Karabakh grows by 40 percent every year. However, it represents only 3 percent of the number of tourists visiting
Armenia.
?
According to Sergey Shahverdyan, last year only 10 thousand out of 380 thousand people visiting Armenia came to Karabakh. “It's not much but it is thanks to the Armenian travel agencies. Unfortunately Karabakh is not mentioned on the official site of the Armenian Agency for Development of Tourism,” Sergey Shahverdyan added.
?
On 29 May 2007 Sergey Shahverdyan held a news conference in which he briefed about the recent tourism expo held in Moscow (Gostini Dvor) from 17-20 May 2007 in which travel agencies from 35 countries and 70 regions of Russia took part.
?
The Azerbaijani embassy and a number of Azerbaijani organizations in Moscow sent lots of letters with protest and threats to the organizers. According to Sergey Shahverdyan, the Russian agencies were reserved, but in order to avoid clashes, Karabakh agreed not to display the symbols of the Republic of Nagorno-Karabakh. “Since it was a commercial exposition, we did not insist on state symbols, but we had a separate stand with a sign “Nagorno-Karabakh”. On the first day 3 or 4 Azerbaijanis hang about the stand and tried to misinform the visitors.
?
Davit Ishkhanyan, member of the agency, said the participation in the expo was financed by “Karabakh Telecom”.
?
During the exhibition a sampling of Karabakh wine took place. “Karabakh Gold” provided an assortment of wines.
?
“There is growing interest among travel agencies for tourism in Karabakh”, Sergey Shahverdyan confirmed.
?
Source: “KharabakhOpen”, 30 May 2007
http://www.karabakhopen.com/src/index.php?lang=en&nid=3797&id=3