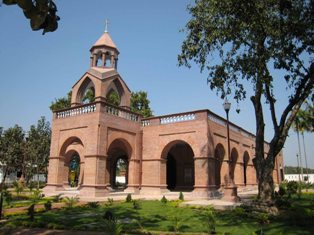 04 March 2007 was a memorable day for the Indian Armenians. His Grace Archbishop Aghan Baliozian, Delegate of his Holiness, Catholicos of All Armenians to the Diocese of India and the Far East accompanied by Rev. Father Oshagan Gulgulian, Manager, ACPA, Father Vardan Navassardyan, guest from Etchmiadzin and Deacon Tigran Baghumyan, Administrator ACPA, consecrated the altar of St. Mary Armenian Church of Saidabad and 16 crosses of its columns.

The construction of St. Mary Armenian Church of Saidabad in 1758 was financed by Khoja Petros, a well known Armenian merchant and benefactor from Julfa. In 2006 the newly elected Calcutta Armenian Church Committee decided to renovate the church, construct a new belfry, reception hall, repossessed land illegally taken from the church and tidied up   the entire church property.

Following the consecration of the Church, in his sermon Bishop Aghan congratulated the congregation on this happy occasion and emphasised the importance of preserving the Armenian spirit under the arches of the church, where for centuries our forefathers prayed. Bishop Aghan thanked the church Committee and the spiritual Head of the Indian Armenians, Rev. Father Oshagan Gulgulian for their efforts and wonderful achievement. After the consecration ceremony a requiem service was held for the repose of the souls of all those buried within the church compound.

The service was attended by the Church Committee, members of the community, Mrs. Lussie Aivazian and her grand daughter, Helen Cray from U.S.A. Lussie Aivazian is the daughter of  Tatheos and Mary Carapetian, who were  the last Trustees   of the Saidabad Church.