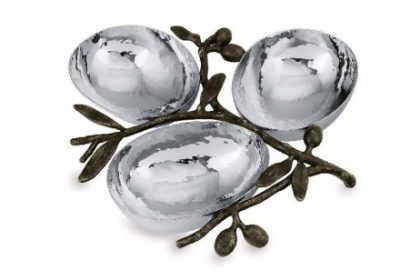 It is not until he mentions it that you notice the darker undertones of some of Michael Aram's pieces. The American-Armenian designer is famous for creating beautifully sculpted tableware and decorative items, but there is a complexity to his work that goes beyond the natural motifs and intricate craftsmanship.


Perhaps it has something to do with his preferred materials – stainless steel, often blackened, aluminium, oxidised bronze, nickel-plate, glass, gold-plate; all visually prepossessing, weighty and no-nonsense. Or perhaps it is because he is essentially an artist and conscious of creating “objects as sculpture”. One thing's for sure, these are more than mere trinkets.

“My work can tend to be a little gothic at times and that's something that people can be afraid of,” he says. “I've done collections based on the idea of decay – decayed leaves, burnt edges, cracked leaves. We design these pieces that are all filigree and they are so pretty, but they celebrate that overlooked, slightly dark aspect of something. I've designed collections around thorns, which are some of the prettiest pieces I've done, but people were like: 'Really? Thorns?'

“I've also done a lot of skeletal stuff. Bone cutlery and the like, which is now selling at auctions for thousands of dollars but at the time, people were asking: 'Are you okay? What's going on with you?'”

It seems slightly incongruous to be discussing skeletons with the impeccably dressed, eloquently spoken Aram, ensconced as we are in the swish confines of the gift registry room in Dubai's Bloomingdale's Home store. Aram is making a quick stop in Dubai – his first visit to the city – to mark the launch of his latest collection at Bloomingdale's. He will be jetting off to India the next day.

And that, of course, is where it all began. It was in 1988, during a three-month visit to India, that Aram “fell” into the world of craft. “I had been making art in New York, fine art stuff, and being in India just woke up this thing in me. Without really thinking about it, I just started doing drawings and working with these local craftsmen; it was just instinctive.

“Working with the craftsmen was amazing. We came from these incredibly diverse experiences. I always think of it like jazz improvisation – that back and forth. What do they know that I don't and what can I offer that they don't have?”

Aram has spent a significant proportion of the subsequent 24 years living in India, and continues to divide his time between New Delhi and New York – although, as the proud father to eight-month twins, he now tries to spend longer periods in the Big Apple. His workshop in Delhi employs 250 craftsmen but Aram is still responsible for the design of all products. “I've never been an ivory tower designer,” he says. “I've always been there. I believe in staying super-connected to the process. That's just me. It's the only way I can do it.”

Aram's creation are now sold globally, in some of the world's most exclusive retail stores, including Selfridges, Macy's, Saks and, of course, Bloomingdale's. There's the tableware, which includes everything from bowls and cheese boards to platters and 'chip and dip' sets (although Aram baulks at the phrase). There are also the decorative items, which include vases, candles, frames and most recently, diffusers.

His products are designed to inspire people to entertain, and to make the whole process that little bit easier. “People are petrified to entertain in New York,” he says. “They work such long hours, nobody cooks anymore, and it's all about going out for dinner. People don't invite you to their homes anymore, but they really want to. So the trick is to keep it easy. Serve some drinks and cheeses but make it beautiful and make it easy. Just open the door and welcome them in. Have fun with things.”

Aram has also started creating high-end, limited edition sculptures, which sees him return to his roots as an artist in the more traditional sense of the word. He is excited by the creative freedom that this affords as, unrestrained by functional demands or the need to keep price points down, he is free to just have fun, he says. To add to the ever-expanding portfolio, Aram is also currently working on some textiles, a jewellery line and his own porcelain dinnerware collection.

“People always say: 'Oh my God, your stuff is everywhere' and I say: 'Yeah, we're the 24-year overnight success story!' But if you look at some of the brands that we sell side by side with, they are some of the most venerable brands in the industry. It's really humbling.”

Of course, it wasn't always plain sailing, Aram admits. “Without wanting to sound melodramatic, it was really hard. In those days we didn't have telephones in India; there were barely any cars – the Maruti 800 had just hit the scene. There was no trade show and there was no phone book. I found craftsmen by smelling them, literally smelling the molasses in the sand from the casting and hearing the metal being beaten. That was my trade show, listening and asking and hunting.

“But I was 25. I didn't know any better. I didn't know how hard it would be. And I had such excitement for what I was doing that it didn't really matter. If I knew then what I know now, I probably wouldn't have done it. Why go to India? Why not go to Mexico, which is so much closer? That would be more logical. Or why not just design it and live in New York? But it wouldn't have been my life – and I would never change it now.”

Over two decades on and India has changed almost beyond recognition – but this has brought a new wave of challenges in its wake, Aram says. “As much as we have been able to create a beautiful workshop and encourage our craftsmen, these are jobs that a lot of people don't want to do or don't want their children to do. They'd rather work in IT or call centres. Even my most skilled craftsman would rather have his son be an office peon. There's the reverse snobbery there.”

In spite of these challenges, Aram has retained an unmistakable fondness for India and an unwavering commitment to the craft process. He is also dedicated to developing new techniques and processes, which is something that sets the brand apart from its competitors, he says. “You really have to evolve. I always tell my team in New Delhi that we have to be like Madonna. You can't just have that one hit.”

Much of that evolution comes from staying true to one's self, he explains, and this is backed up by the honesty and integrity of his work. As he often tells the students that he lectures at New Delhi's National Institute of Fashion Technology, “Trend is yesterday's news. You don't want to fall into that trap. The trick is to be authentic to who you are and what you are feeling. Maybe it sounds obnoxious to say it, but I would rather set the trend. You have to be sensitive, keep yourself excited and innovate always.”