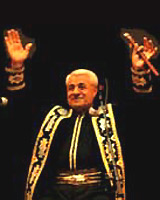 “It was a big honor for our culture and our people,” says legendary musician Djivan Gasparyan about being one of five “Best Traditional World Music Album” nominees at the 49th annual Grammy Awards on Sunday, February 11.
?
The Armenian duduk virtuouso and Persian vocalist Hossein Alizadeh were nominated for their collaborative album “Endless Vision.” Even though the award was handed to an African gospel group called the “Soweto Gospel Choir,” Gasparyan says he was honored to have been part of the show at the Staples Center in Los Angeles.
?
The “Best Traditional World Music Album” nod was Gasparyan's first Grammy nomination from members of the National Academy of Recording Arts and Sciences in the U.S. However, the internationally renowned legend has already received other sought-after international music awards, like six gold medals from UNESCO.
?
The maestro, who has toured the world sharing Armenian music and the haunting sounds of the duduk, has also been honored with a “Lifetime Achievement Award” at Womex, the World Music Expo. Womex chose him for the honor out of 1,900 of the world's most talented and best musicians. Now his peers in the U.S. are catching up and realizing Gasparyan's contributions to the recording industry in the U.S. with his first Grammy nomination.
?
The 77-year-old took his 26-year-old grandson, Djivan Jr., to the award show in Los Angeles, because he believes his grandson is following in his footsteps and will also become an outstanding and exceptional concert musician. Grandfather and grandson tell the “Armenian Reporter” that the Grammy Awards show was fantastic, entertaining and very well-produced.
?
Gasparyan will be spending the next two months in Hollywood, recording music for an upcoming biography about his career. A German studio is documenting the legendary musician with a full-length feature and companion album. Djivan Jr. is confident that this new album will win a Grammy at the 50th annual show next year.
?
The prolific musician is also continuing his work on major motion pictures. His recent contributions to soundtracks have included George Clooney's “Syriana,” music to the “Ashes and Snow” art show, and to the recent box office hit, “Blood Diamond.” And let's not forget Djivan's presence in the movies “Gladiator,” “The Passion of the Christ,” and “Munich.”
?
Connect: www.gasparyanjivan.com, www.cdRAMA.com
?
Source: “Armenian Reporter”, 17 February 2007?
http://www.armenianreporteronline.com/