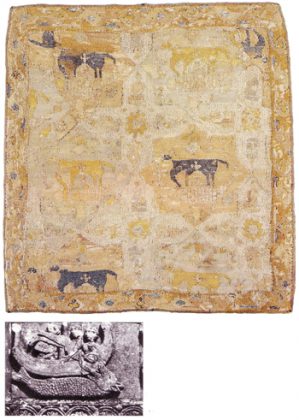 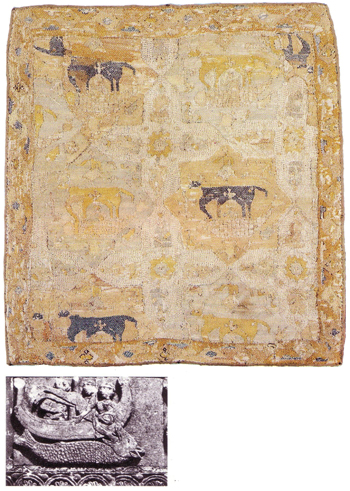 It?s officially the Year of Armenia in France, and in a celebration that is not without sadness, members of Paris?s large and influential Armenian community have organised an exhibition at the Maison des Arts in the town of Antony, near Orly Airport, to mark 400 years of the Armenian presence in New Julfa, the Armenian quarter of the central Persian city of Esfahan, which was founded early in the 17th century by Shah Abbas the Great for the more than 150,000 Armenians moved there by force from Julfa in Nakhichevan.

Although primarily a nostalgic look at the history of New Julfa, and resting very heavily on late 19th and early 2oth century photographs of sites such as the Armenian School and Vank Cathedral, as well as of the families of members of the community, there were also a number of artefacts displayed, including items of costume and textiles, that relate directly to Armenian culture in Iran. Included among the latter was this 17th century northwest Persian/Caucasian embroidery, depicting the Biblical story of Jonah and the Whale, which was loaned for the exhibition by Artemis Achdjian.

In addition to the Armenian crosses formed by the reciprocal space between the sixteen-sided star panels of the field, an Armenian Christian source is indicated by the drawing of the whale, shown as a giant scaly fish, which which in the embroidery appears beneath a stylised four-legged creature (with more crosses on its flanks), but which can also be seen beneath Jonah?s boat in an early 10th century bas relief in the Church of the Holy Cross in Aghtamar.

Hali magazine: The world leader in its field, HALI (the name means carpet in Turkish) is the glue that holds the international rug and textile art market together. Described as “the benchmark against which all other art publications measure their quality”, HALI is an international bi-monthly magazine of exceptional style, brimming with information and re-designed for the new millennium. It is essential reading for the amateur and the connoisseur alike.