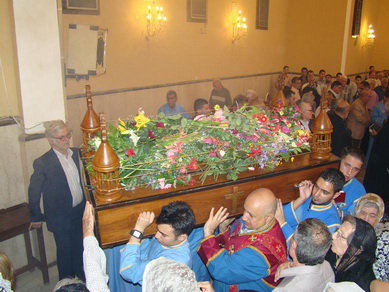 The Armenians of Baghdad once again proved their indomitable spirit regarding their faith and attachment to our Mother Church during Lazarus Saturday, Palm Sunday, Munday Thursday, Good Friday, Holy Saturday and Easter Sunday celebrations.

During the aforementioned services and Divine Liturgies a huge number of Armenians flocked to St. Gregory the Illuminator Cathedral in Baghdad.

His Eminence Archbishop Avak Asadourian, Primate of the Armenian Diocese of Iraq, presided over all Church ceremonies and celebrated Divine Liturgy on Easter Sunday.

On the Eve of Lazarus Saturday His Eminence tonsured six young men into the rank of acolyte and reader. Then he confirmed the rank of sub-deacon on tbir Hovsep Mesropian.

On Palm Sunday the Cathedral was adorned with palm boughs and olive branches where the Divine Liturgy was celebrated with many believers in attendance. In the afternoon our people participated in the services of the Opening of the Doors (Trenpatsek).

On Holy Thursday different Church services were conducted during the whole day. In the morning Divine Liturgy was offered in remembrance of the Lord's Supper. Early afternoon the Washing of the Feet Ceremony was conducted. This year Avak Serpazan washed the feet of 12 people from among Diocesan Council's and our community centers? Committee members and two acolytes. After a short recess Khavaroom vigil was observed with attendance of very many faithful during which six Gospels of the Passion of Christ were intoned. When the lights were turned off in the Cathedral “Oor Yes Mayr Eem” was chanted by Deacon Aram Ketenjian and Mrs. Shaghig Vartanian taking turns.

At the conclusion of this heartrending melody His Eminence delivered the sermon indicating that “Jesus Christ expiated the sins of the world by carrying upon him the heavy load of the transgressions of humankind. Therefore this night is an invitation for each and every one of us to give thanks to Almighty God for allowing the supreme sacrifice of His Divine Son. During this night love acquired a new meaning; it became synonymous with God and another name 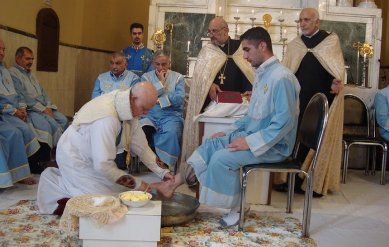 for the Almighty. Because of the sacrifice of Jesus, Saint John was able to write in his First letter that God is Love” (1 John 4:8).

In the afternoon of Good Friday the Burial Ceremony of our Lord took place with the attendance of a huge number of our faithful. A semblance of a wooden coffin, laden with fresh flowers brought by the believers, was carried within the isles of the Cathedral for the adoration of our people. After services the flowers were distributed to all those present.

In the afternoon of Holy Saturday, after reading passages from the Old Testament as well as from the Prophecy of Daniel, Divine Liturgy was celebrated during which the Easter Messages of His Holiness Catholicos Karekin II and our Primate were read.

On Easter Sunday Episcopal Badarak was celebrated by His Eminence with the participation of very many faithful. After Avak Serpazan's sermon and the singing of the Lord's Prayer all those present received Holy Communion. Although four huge car bombs occurred faraway with a very noisy blast, nothing marred the inner happiness all of us felt at Easter, the day of Christ's victory over evil, sin and death. It was truly a wonderful celebration with the feeling of calm and peace which surpasses all human understanding.

During all the services the “Zvartnots” choir under the direction of Mr. Nubar Peshdigian sung proper hymns and the Divine Liturgies.

Photos from the Diocesan Office. Additional photos by Yervant.