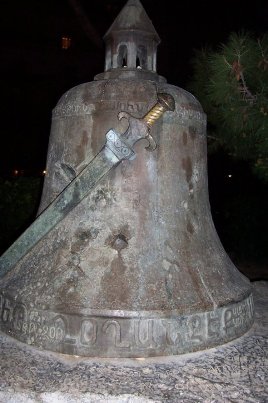 Armenia freezes reconciliation process as a result of the Turkish deadlock


Exactly one year after the announcement of the roadmap for normalizing the Turkish-Armenian relations (which initiated the so-called football diplomacy), Armenia realized that the roadmap has become useless and the protocols signed under international umbrella in October 2009 were used by Turkey to gain time, to divert attention away from worldwide Genocide recognition efforts and to exercise pressure on Armenia in the Nagorno Karabakh issue.

Turkey was hoping to overpass another 24 April commemoration day, trying to sell to the world the big idea of normalizing the relations with Armenia. Obviously, not everyone is impressed with the Turkish diplomacy. Turkey needs a long way to achieve the “zero problem” with neighbours, ambitiously announced by its leadership.

A country that considers itself eligible to join the European Union, will never tolerate a leader that will openly threaten foreign immigrants. Turkish Prime Minister Recep Tayyip Erdogan however does not believe his threats are non-consistent with the European standards. Instead of apologizing, he only made a clarification saying that his threats were actually against the holders of Armenian citizenship, while Turkish Armenians, considered to be citizens of Turkey, were exempt from deportation threats.

In the last few months Turkish foreign diplomacy attempted to show to the Armenian government and to the world that Diaspora Armenians are the “evil”. It warned Armenia not to follow its Diaspora and accused Diaspora of dragging Armenia into geopolitical deadlock. What was its bargaining proposition to the Armenian state and people? Forget the Genocide, forget Karabakh and forget Diaspora and we will be friends with you forever, the same way we used to be brothers with your exterminated other half during Ottoman times!

This offer, regardless of its utmost ignorance of the Armenian national dignity, does not even look anything closer to any of the oriental bargains carried on in Turkish bazaars. It looks more than a hidden wish by the Turkish side to continue the old policies with an implicit genocidal mentality.

A month ago, a country like Sweden where only 10 thousand Armenians live, passed a resolution through its parliament recognizing the Armenian Genocide. The message was clear: Armenian Genocide is a fact that cannot be ignored. It is a historical reality with modern implications.

This prompted Turkey to understand that the Genocide recognition process is not any more related exclusively to the Armenians. It has become the cause of non-Armenians too.

This move, in fact, is meaningless when it aims only to demonstrate that Turkey is a friendly country that does not hesitate to stretch hand of friendship to everyone, including the “evil” Armenian Diaspora.

Even at this point, when Armenia has suspended the reconciliation process (see President Sargisyan's speech), Turkish Prime Minister Erdogan did not lose the chance to pepper his words with propaganda, saying that his country remained committed to achieve goals set by the protocols with Armenia. Specifically he said “as we have earlier stated numerous times, we are loyal to the protocols, their essence and spirit as well as their implementation,” (The Anatolian Agency).

Erdogan, however, failed to mention the countless times that he and his government officials were cited dictating heavy preconditions on Armenia, not found in the text of the protocols. Are these indications that Turkey is loyal to the protocols?

Turkey has not been loyal to the protocols or ready for the normalization of the relations with Armenia. This was obvious long time back to the Armenians. The difference now is that the whole world knows about it.